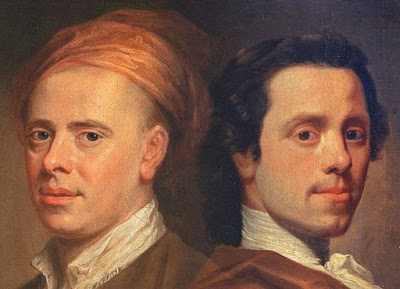 Allan Ramsay Snr Born 1684 – 1758 Leadhills Lanarkshire, was a Scottish poet who strongly influenced Robert Burns. He was one of the founders of the Easy Club, a group of like-minded men who enjoyed literary discussions over a bottle of claret. It was known for Jacobite sympathies and Ramsay was determined the Scots language would not die out in the years after the Act Of Union (1707) when “North Britishness” was all the rage.
He started to earn money for his verse collections in Scots and then decided to turn his wigmaking shop in the Old Town into a booksellers. He also decided to  rent out books, and became known as the founder of Britain’s first library.

He also composed Scotland’s first opera The Gentle Shepherd, which is a ballad opera both comedy and a homage to the joy of pastoral life, which was his masterpiece. There is monument to Allan Ramsay Snr in Princes St Gardens.

Allan Ramsay Jnr was his eldest son. He studied art in London and Italy and then based himself in Edinburgh in 1738. He established himself as a portrait painter and later moved to London. Where he was appointed official portrait painter to King George III. Earlier this year, his long lost portrait of Charles Edward Stuart, painted at Hollywood in 1745, was bought for the nation at a cost of £1m and now hangs in the Scottish National Portrait Gallery.