“Brave New Words’
In times of turmoil words are a safety net, help us to shared understandings.

Edinburgh International Book festival 2017, 12th - 28th August - https://www.edbookfest.co.uk
The festival, begun in 1983 and is one of the world's biggest, will have 1000 authors from 50 countries and will host Illustrators, musicians, scientists, politicians, scientists, children authors and more.


Words and stories are our passports to a better fairer world. Imagination is Free! Whether the words are carried in song, in poetry, in political ideas, in images, fairy tales, history, theories, journalism, truth or in stories.

Recently, In Grenfell Tower block Kensington, we all witnessed the most horrific fire, where probably hundreds must have died! (yet the first reports claimed only 6 – was this all a cover up?)
Writer Ben Okria visited the site and wrote his poem – Grenfell Tower

How this tall burnt out blackened shell is a metaphor for our failings – our failings to recognise the CLADDING on our very discourse. He says - We need to tear down this cladding and open our eyes to what is around us.

There are signs of hope – more people are reaching for investigative journalism where they can find it!
The young especially are now disregarding traditional news media and searching for answers elsewhere. Macron started a new political party only one year ago – and won the vote. Things are changing fast in our fast interconnected world.
Enlightened discourse is always about diversity! And the book festival encourages open questioning and debate. Robert Burns ran his own Debating clubs at Tarbolton. 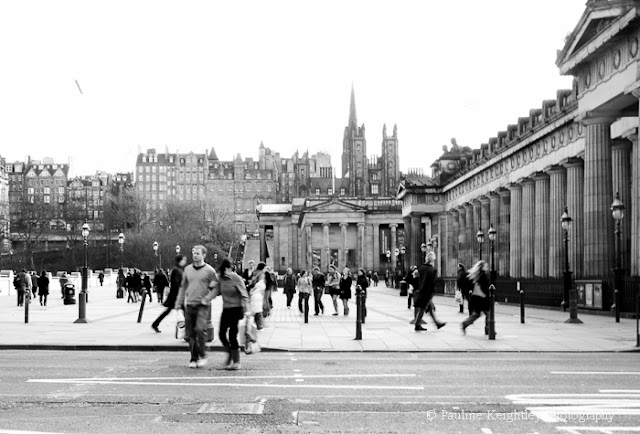 In Edinburgh old town, the grand, the ordinary, the eccentric – all rubbed shoulders. It was this inconvenient bumping against each other that helped to make the Scottish Enlightenment happen.
Another factor that brought in fresh air, was after the union of the crowns, the royal court left for London! Which meant a breath of fresh air – as all he hangers on left too.


They built the Georgian Edinburgh new town in the 1780s – finishing with the elegant Charlottes Square. The largest and most impressive Georgian development in the world. In Glasgow the marble staircased Town hall is vastly impressive – built over this period, when the tobacco and slave trade brought great benefit. There was also great expectations.
The well to do no longer mixed …. and the Enlightenment withered.