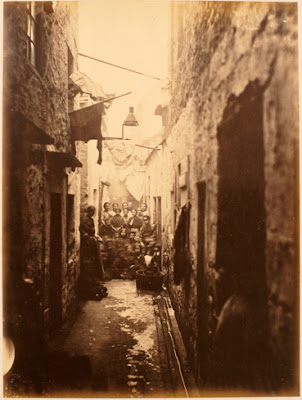 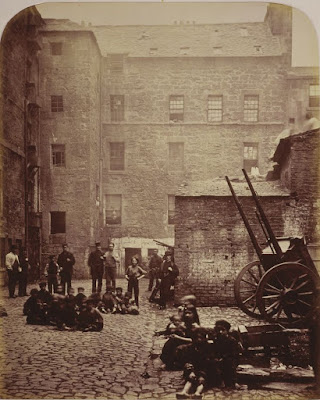 What Happened to the Glasgow Saltmarket slums?

“It is a revolting State of Filth and Squalor”
Photographer Thomas Annan photographed the filthy Glasgow slums in the Saltmarket.
He also shot images of the Glasgow cathedral and the building of the Loch Katrine reservoir.

And today near the Saltmarket Glasgow is the upmarket area of the yuppie Merchant City. How times have changed!

In the mid 18th century (1750) – the Saltmarket had the Glasgow college and it was the place to be, the Dear Green Place was like Bond street or Saint-Germain.
The Saltmarket was originally home to the fullers – scourers of woollen cloth. 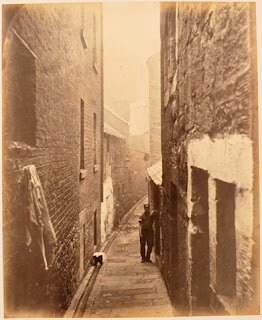 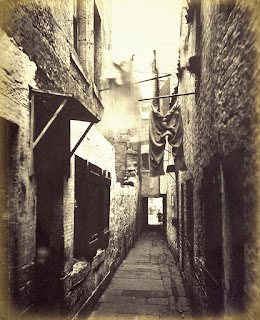 Displaced people from the Highlands and Ireland flooded here and the Salmarket turned into overcrowded, filthy slums. Their closes were dark and damp  Disease was rife. The only time there as running water was when it rained, and mortality rates were the highest in Scotland.

Alan Taylor writes of these disturbing photos in the Herald. “People with nothing to do and nowhere to go’” Overwhelming impression was one of hopelessness and decay. “There is none of the colour of a Neapolitan back street or the chaos of a Mumbai Shanty town. There is no movement or energy." 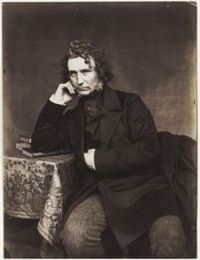 A Police superintendent wrote at the time –
In 1842, a government report spelled out the scale of the problem as ever more people flooded in from the Highlands and Ireland:
“In the very centre of the city there is an accumulated mass of squalid wretchedness, which is probably unequalled in any other town in the British dominions. In the interior part of the square, bounded on the east side by the Saltmarket, on the west by Stockwell-street, on the north by Trongate, and on the south by the river, and also in certain parts of the east side of High-street ... there is concentrated everything that is wretched, dissolute, loathsome, and pestilential. These places are filled by a population of many thousands of miserable creatures. The houses in which they live are unfit even for sties, and every apartment is filled with a promiscuous crowd of men, women and children, all in the most revolting state of filth and squalor.”

The Highland Clearances and De-population of the Highlands took place twice, in the 18th and 19th centuries. The Landowners forced the existing people from the land they had farmed for generations, to make way for sheep grazing. The smoke from burning roofs filled the skies, to prevent reoccupation. All the homes would burn for 6 days….We drive still through areas with burnt out shells of cottages. People fled to the coast and to Glasgow or emigrated.

Annan was commissioned to produce a series of photos from 1868 – 1871 of the centre of Glasgow. He made 31 images that show how appalling the conditions were for many poor Glaswegians.

The Glasgow college was demolished and moved to the Glasgow Westend. 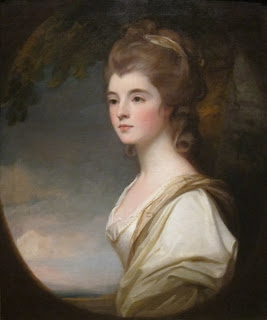 As an example of ... "clearing" ... the Duchess of Sutherland will suffice here. This person, well instructed in economy, resolved ... to turn the whole country ... into a sheep-walk. From 1814 to 1820 ... 15,000 inhabitants, [or] about 3,000 families, were systematically ... rooted out. All their villages were destroyed and burnt, all their fields turned into pasturage. British soldiers enforced this eviction, and came to blows with the inhabitants. One old woman was burnt to death in the flames of the hut which she refused to leave. Thus [the Duchess of Sutherland] appropriated 794,000 acres [321,320 hectares] of land that had ... belonged to the clan. She assigned to the expelled inhabitants about 6,000 acres [2,428 ha] on the sea-shore – two acres per family. The 6,000 acres had until this time lain waste, and brought in no income to their owners. The Duchess ... actually went so far as to let these at an average rent of 2s. 6d. per acre... The whole of the stolen clanland she divided into 29 great sheep farms, each inhabited by a single family, [and] for the most part imported English farm servants. [By] ... 1835, the 15,000 Gaels were already replaced by 131,000 sheep. The remnant ... flung on the sea-shore tried to live by catching fish. They ... lived ... half on land and half on water, and withal only half on both.
–Karl Marx, 1867, Capital, Volume 1. 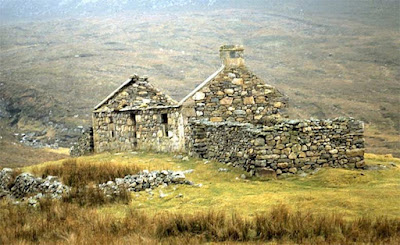