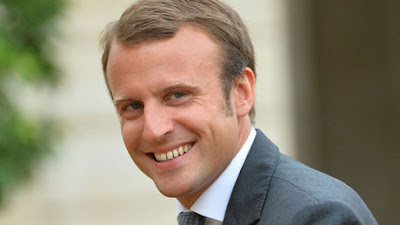 Promises a new dawn in France of progressive socialism – business friendly, more democracy in Europe, based on a stronger vision and identity for France. He’s a breath of fresh air in Europe, in the centre ground. Politics are no longer about out-dated empires or right or left (this is all good news for Scotland).

Our divergence and diversity of views is our very strength and what makes us human. Clamping down on an ‘open press’ – turns us to our dark side; the side of fear of strangers or strangeness and the fear of the unknown - rather than be open to travel, to new ideas and to ‘otherness.’

Macron has offered France hope for another way – can we offer Scotland this too? The far right unionist media’s response is funny - they are a bit scunnered and they had been hoping for another crazy far right nutter in Le Pen with headlines – 'Populisms weeps across Europe.' (or sweeps)

Scotland has to choose now whether to be tied and restricted by a Brexit England, isolated from Europe and desperate for far away deals with corrupt and murdering governments – or wanting to be the 51st state of Trump’s America. It’s a prospect for failed capitalist, imperialist polices.
What will a foolish Brexit mean for the Arts, culture, music and writers? Or writing for an American or Chinese audience, while we try to ignore our European past? Yes in recent times we’ve had Hollywood cinema and Netflix, but when we dig deeper to the centuries before, we find our close ties and our very European past.