The Poems of Ossian 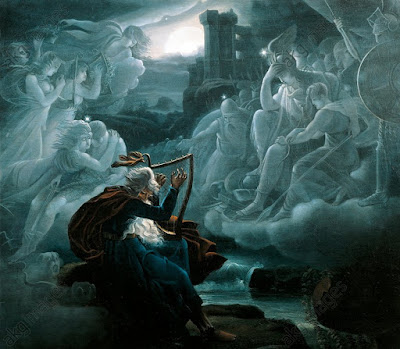 Macpherson’s poems of Ossian translations from the Gaelic traditions – had a profound influence on many painters, poets and writers. And his books were read internationally. The poet MacDiarmid lamented for Scotia’s lost music.

“The poems of Ossian had a profound influence but the idea that Macpherson perpetrated a “hoax” persists. This is unjust and inadequate. In Fiona Stafford’s words, Macpherson’s Ossian is “pre-eminently a text of the margins – not in the sense that it is peripheral to serious literary study but because it inhabits the margins of contrasting, oppositional cultures. 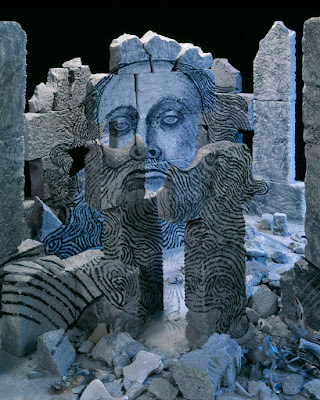 “For Macpherson’s ‘translations’ involved acts of interpretation not only between Gaelic and English, but also between the oral culture of the depressed rural communities of the Scottish Highlands, and the prosperous urban centres of Lowland Britain, where the printed word was increasingly dominant.”

In this context, they are “less the work of an inexpert linguist, or an unscrupulous ‘Scotsman on the make’ than a sophisticated attempt to mediate between two apparently irreconcilable cultures.”

The legacy of Ossian, beyond Macpherson’s actual works, is immense, deep and surprisingly rich. Images of Ossian have perennially been a subject for the visual arts.
“To remember the great music and to look
At Scotland and the world today is to hear
An Barr Buadh again where there are none to answer
And to feel like Oisin d’ éis na Féine or like Christ.”

And it is not only paintings and drawings. The literary influence is there, too, and was felt early. Wordsworth (1770-1850), in “Glen-Almain; or, the Narrow Glen” (1803), a result of his tour in Scotland, writes:
“In this still place, remote from men,
Sleeps Ossian, in the NARROW GLEN;
In this still place, where murmurs on
But one meek streamlet, only one:”

Ghosts and graves and windy hills and caves are an essential parts of the story -
as in the short, haunting poem
“Ossian’s Grave” by the Russian writer Mikhail Lermontov (1814-41), here given in my own translation:
“In the Highlands of Scotland I love,
Storm clouds curve down on the dark fields and strands,
With icy grey mist closing in from above –
Here Ossian’s grave still stands.
In dreams my heart races to be there,
To deeply breathe in its native air –
And from this long-forgotten shrine
Take its second life as mine. 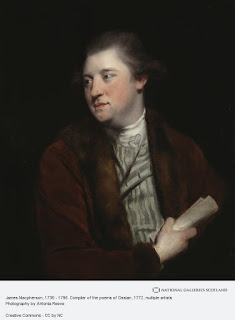 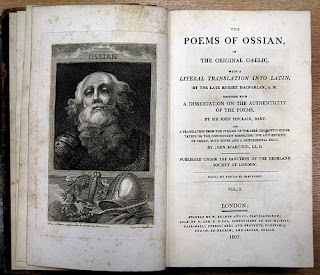 ** The Gaelic phrases relate to this. In footnotes, MacDiarmid explains “An Barr Buadh” is “somewhat in a state between existence and non-existence.”
And “d’ éis na Féine” is:  “A withered babbling old man, ‘Oisin after the Fianna’ (ie when his love for Ireland made him return to it from Tir-na-nog) in that immortal phrase which has in it more than Virgilian tears.”

In other words, the evocation of Ossian “after the Fianna” –
after his father and family and companions of high youth, health and vigour, have all gone into the past, leaving him old, blind and alone – delivers a permanent image of tragic and irrecoverable loss, encompassing and predating other ancient religions and civilisations.
And there is no fraud or hoax involved in that. Its permanence is also Ossian’s legacy. 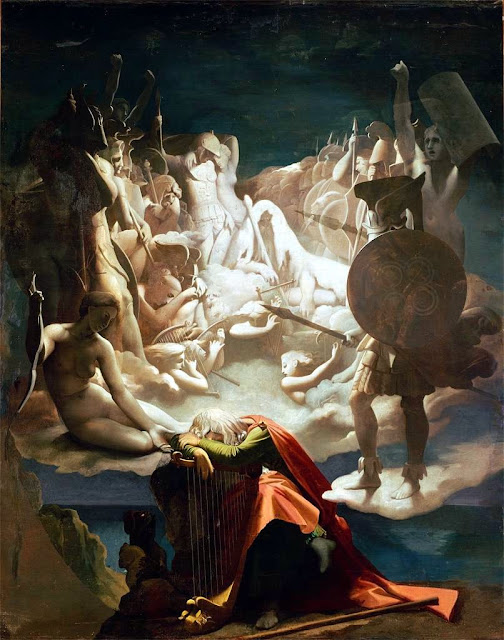