In April it will be the first centenary of Northern Ireland.

While the rest of Ireland is the Free State of 26 counties.

Northern Ireland did have a Protestant majority, as there is now a balance equally between Catholic and Protestant. My parents were Ulster unionists and I grew up over in Edinburgh Scotland and visited Ireland in the summers growing up. I have mixed views and during the Brexit debates I couldn’t believe that the English debates never gave any thought to what on earth might happen in Ireland. So much time and effort went into establishing peace with the Good Friday agreement. So much wasted time on this ill-advised Brexit.

I remember the nightly news during the Troubles of bombings, murders or knee cappings. I felt angry that Brexiteers gave no thought to these issues. The troubles began with peaceful protests by Catholics of decent housing. Especially as I still have no understanding of why or what Brexit is about – except saving the Tory party and avoiding the new EU regulations for tax avoiders. Or was it about saving Englanders view of themselves.

**The Captain of his Football team

Recently I discovered an old black and white photo of my fathers’ father – my granddad – who was captain of his Irish football team. And also a letter from my father to my son dated 1986, when he wrote this treasured photo was from 75 years ago. This photo was taken in 1911– 100 years ago. He played football for the Ards team and won caps by playing for the Ireland team.

I realised then this photo was before partition and before the Troubles that followed.

I remember visiting Northern Ireland when there were long road blocks and helicopters hovering over head. Scary times.

also known as the Republic of Ireland (Poblacht na hÉireann), is a country in north-western Europe occupying 26 of 32 counties of the island of Ireland. The capital and largest city is Dublin, which is located on the eastern side of the island. Around 40% of the country's population of 4.9 million people resides in the Greater Dublin Area.The sovereign state shares its only land border with Northern Irelandwhich is part of the United Kingdom. 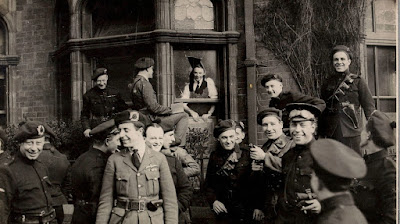 Its the centenary for Northern Ireland in May, so it’s a time to reflect and consider the benefits and drawbacks. When Northern Ireland was set up the Protestants has a clear majority there, but not anymore. So the loyalist community feel under threat and not protected by the British empire as they once did.

There is existential crisis going on across the British Isles - in Scotland and in Northern Ireland is under strain and something has to give. The loyalists there feel more British than many in London, but find themselves cut off from the mainland by Boris Johnson, false lies and his Northern Ireland protocol erecting a border Irish Sea.

The hard Brexit has caused so many problems – for Ireland, for fishing, for farmers, for exports, for immigration and for Scotland. Brexit is a disaster for Scotland – loss of immigration, 40% loss of trade. For businesses in Northern Ireland, its cheaper and easier to deal directly with the EU deliveries, so many are going to consider what’s the point of the present situation. Trying to bring Catholics and Protestant children together in schools worked when we were all in the level playing fields of the EU single market.

The only solution that I can realistically see, is a return to the EU single market – that Scotland has been pushing for. Since 2016, this ill advised Brexit has been a disaster – who actually benefits from it? So far I’ve found no answer to this question (except those with offshore tax funds) If Brexit is about English Nationalism, then its time for English independence – and its well past time for a new constitution.

The Loyalists feel let down by all sides. and ignored in all this. The Tories try to claim this is all about the EU being too strict over the border. The trouble is the British empire no longer exists. The problems Northern Ireland are not only sectarian, they run very deep. Protestants in Northern Ireland feel more British than  many in London and fly union jacks constantly. Its an existential crisis made much worse by this ill advised Brexit. Those in London never considered the dramatic effect Brexit would have on Ireland or Scotland. Brexit makes a united Ireland more likely for instance, for both trade and business reasons.

Today, in Germany children are taught over and over how easily evil dictatorship can take over, to protect and ensure this is never repeated. Its a sad state of affairs that History is sidelined in UK schools and often hardly taught at all. We are taught of the Tudors but nothing of more recent and crucially important histories of Empire and imperialism.

However Boris is on a mission to reclaim the glories of Rule Britannia on the ocean. But this past is well and truly gone: most of the empire are now independent nations since the great wars. 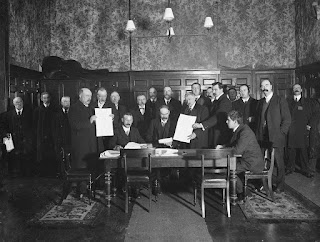 Story of Northern Ireland
Several Gaelic kingdoms, 16th century Ulster most resistant to English control (1596 – 1603).  Norman Irish Lords
The Pale, around Dublin controlled by the English.
Henry VIII, Tudor English king, declared himself King of Ireland in 1542.
The Plantation of Northern Ireland began under the Tudors, and Elizabeth and continued under James Stewart, after union of the crowns 1603.

Scots migrated to Ulster due to Scots famine. There was Institutional discrimination with Penal laws to disadvantage Catholics and Presbyterianism.

250K Ulster Presbyterians emigrated to America and now there is 27m Scotch-Irish Americans and Scotch-Irish Canadians.

1700s there was secret militant socialites.

1801 – United Kingdom of Great Britain and Ireland formed, governed from London. Pushed for 2 kingdoms to merge to quell sectarianism, remove discriminatory laws and to prevent spread of French republicanism and reform for democracy.

Fourth home rule to divide Ireland passed May 1921, with creation of Northern Ireland.