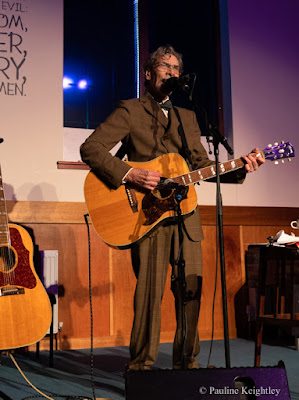 Noakes performed SONGS: Branch, Gently Does It, Together Forever, Oh Me Oh My, Out of Sight Out of Mind.

This evening at the Milngavie folk club was to celebrate Noakes 75th birthday and still going strong.

Rab spoke of all those significant people he has worked with over the years. Rod Clements, Gerry Rafferty, Brooke Williams, Jill Jackson, Barbara Dickson, And praised the women’s voices - and the all women in his band he had backing him at Celtic connections 2019.b

For his interview with

He spoke of his respect for women’s voices - Helen Forrest, thanks for everything. The gorgeous voice, Jill Jackson, Jo Stafford, unforgettable, And of working with the young Scots singer Iona Fyfe and he spoke of her harassment and Equalities award.

Rab spoke of his influences, such as the Everly brothers, his depth of interest in the song, and of Studio B Nashville, and his experiences travelling in the American south. He spoke of Bob Dylan’s 2021 album 'Rough and Rowdy' ways, a terrific place of work, and quoted from the song 'False Prophet' - I’m the enemy of treason, I’m the enemy of your meaningless life.”

He spoke of his style/ image he enjoyed Italian suits and aspired to be a teddy boy, winkle pickers, He likes to keep things smart. He said he was less political then he was, as it gets in the way, He was asked if he might write s book of his experiences, and replied that authors are very disciplined

He took some audience questions – How much was he influenced by Gerry Rafferty, back in1969 with the band Stealers Wheel? He responded that Rafferty had been a stimulus rather than inspiration.

Noaeks was asked about the best song ever written - he dipped into his back catalogue for the song Westerin Home 1952. He talked of the great Michael Marra and his writing of his Fife connections, and said its good to write songs where you live, to write local.

Rab’s been through some tough years with illness and loosing his wife Stephie last year from MSA illness. “When I had throat cancer, and Stephie got sick, He spoke of the pain but that “I don’t let myself get dragged into dark places, times getting short.” He spoke of writing songs with Stephie which influenced and channelled into his music, with the Treatment Tapes and Water is My Friend.

He keeps his spirits up with music and friendships keeping him going – as do his long time supportive fans! Rab has often played house parties. I hope he keeps writing and being inspired by his musical heroes, such as the legend genius songwriter Bob Dylan!

Noakes’s influences are broad from Americana, folk and blues. His songs express personal and memorable storytelling, matched to his intricate and melodic guitar style.