James McNaughtie interviewed highly respected Scottish author Neal Ascherson, at Edinburgh international book festival 2018,Iwho was BBC European correspondent in the 60s. The Cold War was halfway through; Vietnam war was raging; there was American imperialism to protect us from Russia.; there was Prague spring; Bobby Kennedy and Martin Luther King were assassinated in America.

It was a time to the old ideas….
The student unrest in Paris began when male students were not allowed to visit female dorms! Old France was not changing and France has retained the idea of revolution as a possibility, an unconscious idea. In 1789 to take to the streets and make everything different.  The establishment in Uk were terrified it would come to Britain. Late 18thcentury, instead we suffered the suppression after Culloden and later there was imperial suppression on a global scale (slavery, exploitation)

Revolution – Marche On!
Students were jailed and large marches took place. They hoped to reframe communism with a human face. The university closed down, and the idea of self-management and independence took hold.

In Berlin, there was the revival of late Marxism, to rediscover yourself, and create revolution.
The Prague Spring - Eastern block, not Marxism. Polish revolutions, demonstrations and democracy at the level of the workplace. The communication of ideas was so important.
Riot police were used to smash communism/ republicanism to protect the state and there was intense tension
De Gaullewas an authoritarian general and highly presidential, his aim was to defend old France. Are you red or white? There was a frozen France.

The Sorbonne was a centre of revolution and barricade.
The noise and sight of revolution was scary, with huge crowds gathering. Revolution ‘morphed’ and everything changes, institutions collapse, anything is possible. It is all intoxicating, all brothers in arms. Tear gas was used and violence and the French public were unaware. In Munich a student was killed by a brick. Neal believed, considering the level of violence more students were killed.

It doesn’t last long though and leads to a new situation. Things began to subside and some scenes of dissolution and the beginning of a general strike. Germany was deeply against communism. 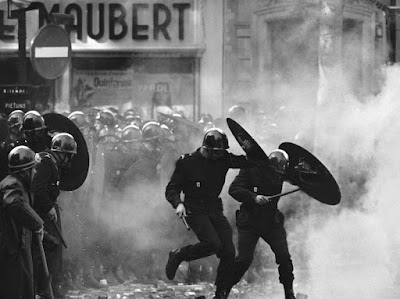 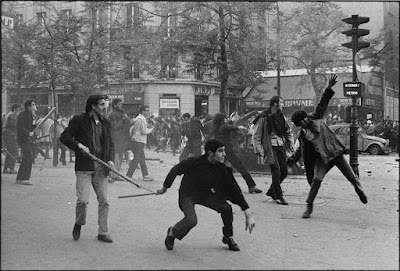 The Legacy of the Paris Riots:  In France, the communists were divided. De Gaulle was protected by the French army in Germany. But the riots eventually defeated De Gaulle, who resigned a few months later.

There were changes in the Soviet system to stop this ever happening again. There were a  change in the social institutions with younger people in positions of power. It scared the established orders, that they could be overthrown; both America and Russia were both shaken. There was 67,000 killed in Vietnam. There were aspirations In Northern Ireland for democracy, and peoples marches. The media was extreme .

It all forced reforms in Germany, not suffocated by bureaucracy and institutions. It was a revelation and changed how people related to each other. Many of the rioters fled – and asked, where is the next barricade? Others concentrated on change in more humane and different ways, such as educating children.

There was no time to chat over the unstable, leaderless and corrupt situation today. A very illuminating and highly interesting chat.
This talk was part of EIBF Freedom and Equality series of events.  Vote for The Death of the Fronsac by Neal Ascherson in the First Book award.