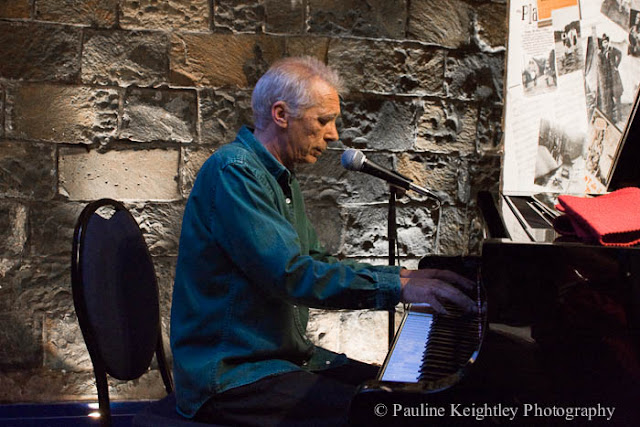 'He paints with Words'
I have heard Marra perform twice at the Mugdock theatre, which with the grand piano off to the left is simply the perfect venue for him, and I list his concerts there back in 2007 and 2008 as some of my favourite ever small venue gigs. When Marra arrived at Mugdock he discovered one of the perfect small theatres there.  It seats around fifty in a tiered semi-circle and to the left of the small stage sits a shiny grand piano. It was built with music lovers in mind.

I managed a short chat with Marra. He appeared to recognize me from last year's festival and I sense he doesn’t miss a beat.  He had his green shirt laid out on the side table.  He said that last year in 2008, he had travelled through the rain and the winding country roads and had wondered where he was going to.  He told me how he loved the Mugdock theatre and the beautiful piano there. You could feel his excitement. 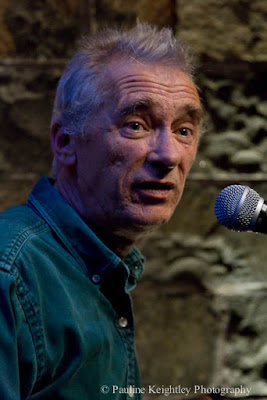 The Gig. All eyes are fixed on Marra throughout.  He was unforgettable playing the small Murdock theatre. His songs are humorous and insightful and with his clever use of words and images he takes us inside his colorful characters.  The first thing that I noticed at his gigs was how frail he looked but then when he performed he surprised me with his energy and his distinctive gravelly voice.

With endearing heart and ironic dry wit Marra led us through his medley of songs which were brim full of unforgettable characters and carefully crafted images of places and time.  Oddly he props his keyboards on top of a small ironing board.

Marra played piano and guitar during his set here and he sang songs with grand titles such as -  'If Dundee was Africa', 'Bob Dylan's Visit to Embra', 'Grace Kelly's Visit to Dundee,' 'Muggie Shaw', 'Freda Kohl's Visit to the Tay Bridge Bar', and 'Lonesome Death of Francis Clarke'.  In 'Schenectady Calling', Marra paid tribute to Peerie Willie Johnson, a noted folk musician from Shetland.  He finished his set with a Burns song ' Green Grow the Rashes O' and an encore song 'Mary Skeffington' by the late Gerry Rafferty of Paisley.

Marra finished with a perfect version of Robert Burn's song ‘Green Grow the Rashes O’ and his smile said it all. For his encore he sang a moving song when he talked about an uncle he never knew who died and about family being in the huff with each other - and he sang the words, ‘Did you forget the world and did the world forget you?’ 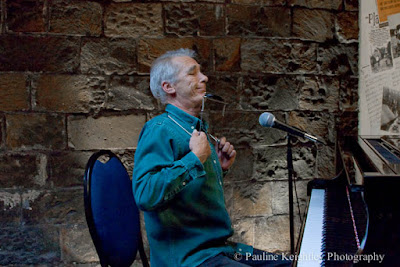 His music has grown out of both his Scottish Dundee roots and his American fantasies and musical tastes - he calls his sound 'groovy traditional music.' He writes songs about topics such as football, ladies choirs, and American idols!  His stories and songs are highly amusing while other songs are thoughtful and touching. There are echoes of his poet and musical hero, Bob Dylan. He cleverly uses humour and irony to describe the diversity and irony of human nature. His musical influences include - Tom Waits, Randy Newman and Bob Dylan. He was a strong character for photos with his wry fun and the light in his expressive eyes. 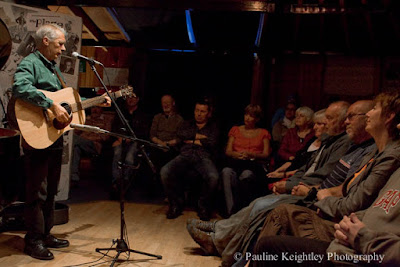 Although predominantly known as a songwriter, Marra worked extensively in theatre, radio and television.  Marra's children, Alice Marra Clark and Matthew Marra, are members of The Hazy Janes. Marra was in a band called Skeets Boliver in the late seventies. He died in 2012 at the age of 60, a very sad loss.
'There's Love in this world for everyone, Every precious smile you make, Be sure love is out there looking for you.'   Michael Marra

The festival was brought together by the fun energy of director Erne Parkin who sang with the Crossborder band, sadly died in 2009.