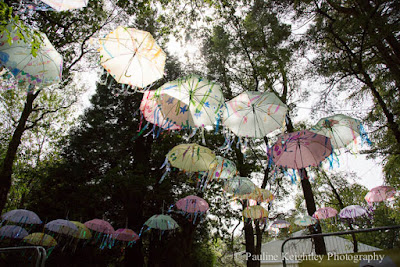 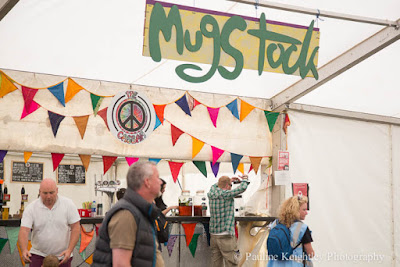 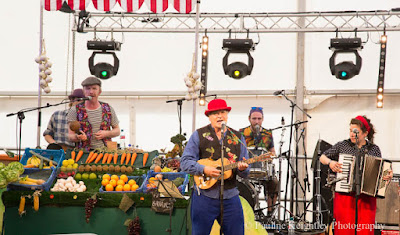 I arrived at Mugstock along with the early buzz of participants, families and music fans. This new festival has been designed to have broad appeal with a mix of music for all tastes and ages. There is a friendly and fun atmosphere -  with live music, theatre, cabaret, arts, real ales and good food. There was also much here to appeal to young families, with many and varied children’s entertainments.

This festival was quirky with shades of hippies and a small scale Glastonbury. The park provided a fitting escapist, historic and green backdrop to both chill in and to dance in. There were flying colours and chimes of hanging umbrellas and flags flying in the breeze among the tall trees.

The main stage was decorated with black and white balloons and had a circle of food stalls outside. Here I heard the beautiful voice of singer songwriter Siobhan Wilson, followed by the fun quirkiness of the Barrow band with their fruit and vegetable songs!. After we were treated to the energizing drums and dance rhythms of Samba Ya Bamba, who took up the tempo. I then took a walk round the other events. 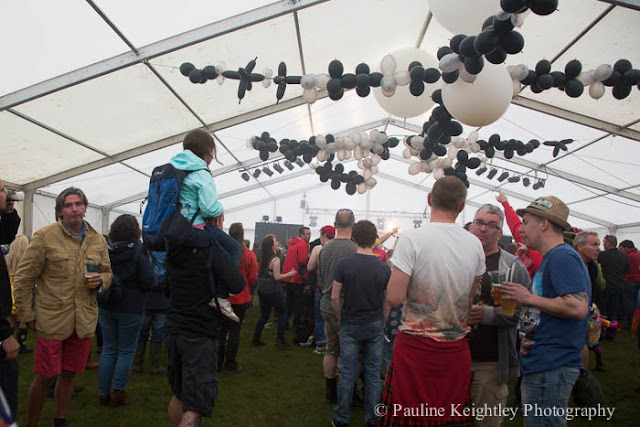 The festival stages were spread out over Mugdock park - with the Erne Parkin main stage off to the right, the Yellow Movement stage among the trees near the adventure park and the Jolly Lovely stage in the walled garden – where 50 Shades of Blue were singing the Wagon Wheel song -- 'Hey Hey Mama Rock Me'. Very oddly I heard the bluegrass band Dirty Beggars performing the exact same song for their encore at Stereo the night before!

I returned at five to the main stage tent to find it packed to see popular 80s band Dodgy where many were reliving old memories and dancing and singing along to the familiar tunes. The Main Stage tent had by now developed a slight mist from the heat of bodies (or the steam machine?) in the enclosed space. The four year old with the ‘born to rock’ T shirt was still running around in front of the stage. 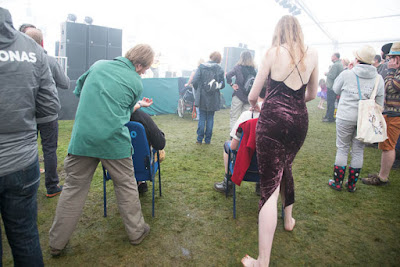 Most people wore walking shoes and I noticed that one girl beside me was in her bare feet in the muddy grass. As I enjoyed my beer and nuts someone was having a Shiatsu head and neck message. It is strange how the atmosphere changes over the day, as time takes a break at festivals and live music. Festivals enjoy different times – the buzz of the afternoon arrivals, the more relaxed time of the late afternoon when we are ready to relax, grab a drink and something to eat before the drama of the evening time.

What is better than an excellent musician, renowned guitarist Preston Reed, who played powerhouse guitar rhythms,, a time to chill with some more earthly time and those moments from hectic online schedules!

I returned to the Yellow Movement stage, which was creatively decorated, to find it packed with revellers enjoying the dance rhythms of escapist band Mikey 9s, who describe their sound as funk.

I met Preston outside the Yellow Stage. He is very tall!  He is originally from New York and he now lives in Scotland.  He said he too enjoyed photography. I also met the singer from the Barrow band and he said they were also doing an adult event in the Mugdock theatre at ten. That is one advantage of festivals – the musicians enjoy to hear the other artists performing and mingle during the day.

My personal highlights were the chilled moments with Preston Reeds dynamic guitar playing, the effervescence of Mikey 9s dancing sound, the energy of Dodgy’s classic rock and the dancing fun of Colonel Custard &The Dijon 5

Overall a highly professional and well organised new festival. Many congratulations to the festival team's hard work for pulling it all together! http://www.mugstock.org 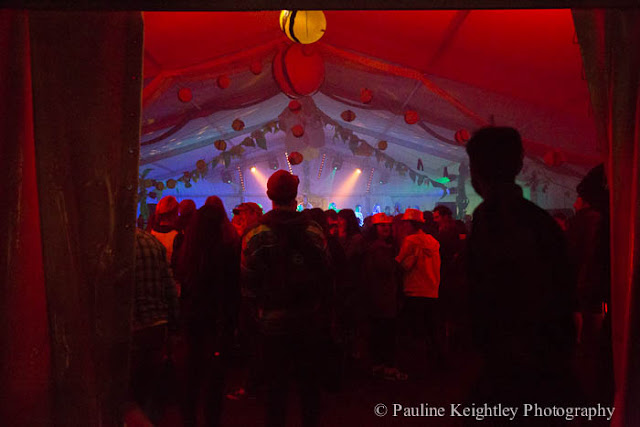