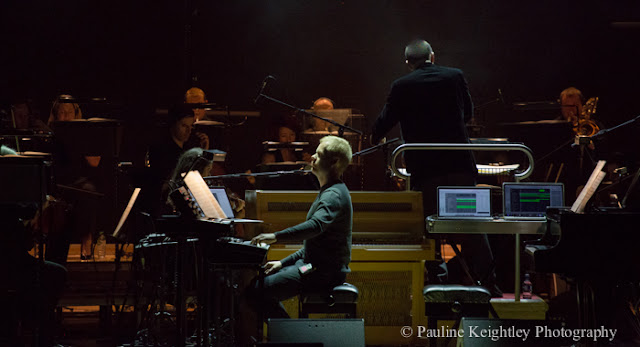 A night to remember!
Max Richter, renowned composer for stage and screen, performed his eighth album of classical and electronic sound, Three Worlds: Music from Woolf Works (2017) at Celtic Connections 2018.

The music is from the score that Richter composed for the ballet Woolf Works in collaboration with choreographer Wayne McGregor and includes a recording of Virginia Woolf’s voice. The work follows a three-part structure offering evocations of three books by Woolf (Mrs Dalloway, Orlando, and The Waves).

Richter played on piano and electronic keys along with the world class Scottish Chamber Orchestra (SCO) at Glasgow concert hall. There were slow, nurturing bass lines along with a repeating piano melancholy, questioning violin, pondering cello and electronic beats.

Then a violin menace as danger lurks, electronica beats too and a plaintive solitary cello repeated the forlorn melody. A sad xylophone played slow notes to release the tension, let it fly and brought us back to a more hopeful sound.


A bell tolled as we heard Woolf’s hesitant and strange voice speak of her memories, before she gave up words and life, ‘No one could have been happier.’ Then the poignant piano melody returned with waves in the background. And after in a powerful moment, there were mournful crescendos with the haunting soprano voice of Grace Davidson. His music is at times pioneering, aching, immersive and searching for resolutions. The stage was lit over the performance with a flow of colours from soft purple to deep reds. For a Reprise Richter performed a short piece entitled ‘On the Nature of Daylight’.  A truly memorable concert. The performance was opened by harpist Catriona McKay and Alastair MacDonald with tales of Scottish times past.

Review and Photos by Pauline Keightley - http://pkimage.co.uk/
Richter is a British composer post-minimalist with contemporary and alternative musical styles with films such as Testament of Youth, Arrival, Miss Sloane.
**Three Worlds: Music from Woolf Works (2017) Three Worlds: Music From Woolf Works is Max Richter’s eighth album, released in January 2017. The music is taken from the score that Richter composed for the ballet Woolf Works in collaboration with choreographer Wayne McGregor at the royal Opera House in London. The work follows a three-part structure offering evocations of three books by Woolf (Mrs Dalloway, Orlando, and The Waves). The album features classical and electronic sound as well as an original voice recording of Virginia Woolf herself.