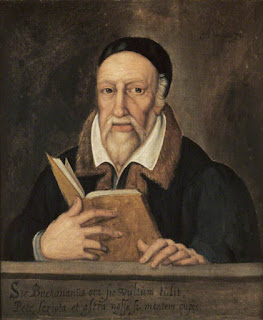 A short distance from my home there is a monument in the small town of KiIlearn to one of the most important writers on democracy, reformer George Buchanan.

He was one of the most significant literary and political figures of the 16th century -  poet, playwright, historian, humanist scholar, and teacher to the great French essayist Michel de Montagne, Mary Queen of Scots and later to her son James VI of Scotland and I of England (United Kingdom.)

Buchanan was a native Gaelic speaker from lower loch Lomond. He was deeply impressed that the Gael had held on to their language and culture for more than two thousand years. He was a Catholic, who was committed himself to the Reformation, and he joined the Reformed Protestant church in 1560s and published
In his article, The birth of the Democratic Intellect, professor Alan Raich, (National July 2017) discussed the importance of Buchanan’s writings. Buchanan wrote De Jure Regni apud Scotos, published in 1579 - one of the most important books in all British (or European) literature on democracy for all. It is originally the most essential text in our understanding of the constitution and the state. (how many of us have heard of it?)
“His book follows the Declaration of Arbroath (1320) in saying that all political power resides in the people, and it must reside in the people: and that it is lawful and necessary to resist kings (or queens, or we might say all rulers) if (or when) they become tyrants.
Buchannan was basing his argument at least partly on his understanding of the clan system. There were many attempts to suppress his work, in the century following – particularly by the king he tutored and he foresaw where stupid Stewart vanity would lead. He was a major player  in the European cultural context.”
**


George Buchanan 1508 - 1582 was a Scottish historian and humanist
Buchanan was "the most profound intellectual sixteenth century Scotland produced." His ideology of resistance to royal usurpation gained widespread acceptance during the Scottish Reformation. Keith Brown says the ease with which King James VII was deposed in 1689 shows the power of Buchananite ideas.
His father, a Highlander and a younger son of an old family, owned the farm of Moss, in the parish of Killearn but he died young, leaving his widow, five sons, and three daughters in poverty. George's mother, Agnes Heriot, was of the family of the Heriots of Trabroun, of which George Heriot, founder of Heriots hospital was also a member. Buchanan, a native speaker of Gaelic. In 1520 he went to the university of Paris and studied logic under John Mair.
In 1528 Buchanan graduated M.A. at Scots college, University of Paris. The next year he was appointed regent or professor, in the, College of Sainte-Barbe and taught there for over three years. Sainte-Barbe was one of the most prestigious and advanced colleges at that time. George added to that prestige by creating new reforms in teaching Latin. In 1529 he was elected "Procurator of the German Nation" in the University of Paris, and was re-elected four times in four successive months. He resigned his regentship in 1531, and in 1532 became tutor to Gilbert Kennedy, 3rd Earl of Cassilis with whom he returned to Scotland early in 1537. Though a layman, he was made Moderator of the General assembly of the Church of Scotland in 1567. He had sat in the assemblies from 1563.

The importance of the work is proved by the persistent efforts of the legislature to suppress it during the century following its publication. It was condemned by and act of parliament in 1584

In the lead-up to the anniversary Professor Roger Mason of the University of St Andrews has published A Dialogue on the Law of Kingship among the Scots, a critical edition and translation of George Buchanan's 'De Iure Regni apud Scotos Dialogus.