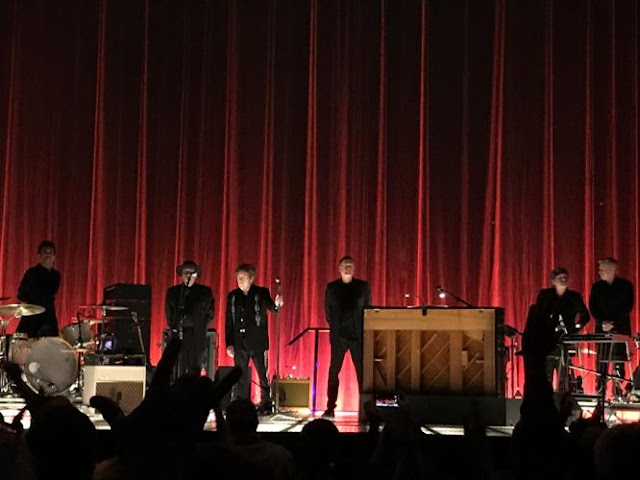 Dylan was centre stage and he stood at times behind his wooden piano: he’s worked to get the sound just right and though he’s mostly in shadow, he appeared upbeat. Dylan digs deep into the American and the more distant European songbooks –and he states both the Scots and Irish folk ballads as influences, along with the classics. He mixes up with Chicago blues, blistering rock n roll, new Orleans flavoured knockabouts and stately melodic reflections.

Bob is proud of his new album which has had top reviews, his first of new songs since Tempest in 2012. Dressed all in black, the band are silhouettes and as the songs begin they are illuminated by the brightly lit squares beneath them, backdropped by deep red velvet – as if floating to that promised land Dylan’s’ words and songs offer us. He’s the true prophet of our times, even though he asks not to be!

We’ve entered slower paced past times before mobile phones, before flashing lights, to inhabit the moment and be free of burdens. The band are strung as one, emphasising the rush and flow – asking, questioning, apologising, and quiet searching of our souls. Dylan’s been through many doorways, seen many distant shorelines. At 80 he’s given us another classic album.

Now at 80 he continues as the journeyman going strong – His band are on top form with surging guitars, to subtle, gentle, backing rhythms surrounding the deep power of Dylan’s words. He savours the live experience, that exchange of song and audience, sharing his voice with his long standing and admiring fans. He seems more at ease with himself, and certainly the new album is slower tempo, chilled and intimate: while still offering the questioning and grit we expect. His songs don’t come easy and they get under your skin. 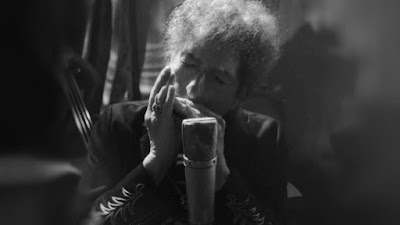 He began his show with Watching the River Flow (written 1971) about those creative urges so crucial to his life. And followed by the complex opening track from R & R, I Contain Multitudes.

The memorable and often quoted lyrics of False Prophet and When I Make my Masterpiece. The intimate stillness of a lovely love song I’ve made up my Mind to give Myself to You. He sang an impressive Black Rider, with unexpected key changes, ‘The road that you’re on, same road that you knew, just not the same as it was a minute ago.” My mind is at war, Hnag off your arm.

Followed by My Own Version of You, Mother of Muses.The haunting slow drumbeat of Crossing the Rubicon, a metaphor to take a leap into the unknown and commit to certain journeys - Take the big road, whatever road you can. Bob sang the chilled relaxed happy rituals of favourite track Key West. We were left in harmony. After which he said, “Hello everyone”. Dylan was centre stage and he stood at times behind his wooden piano: he’s worked to get the sound just right and though he’s mostly in shadow, he appeared upbeat

**Other than the album, Dylan performed Most Likely You’ll go your Way and I’ll go Mine from Blonde on Blonde album. Followed by one of his ultimate classics with surging guitars Gotta Serve Someone, from Slow Train Coming album – backed by Bob Britt’s surging guitar, Donnie Herron’s dynamic pedal steel guitar and the thundering drummer Charlie Drayton. And a very slow version of I’ll be Your Baby Tonight; a cheerful and an cheerful upbeat Be Alone with You, from 1969 album Nashville Skyline - Under the starlight sky; and a swinging cover version of That Old Black Magic.

Dylan performed a rousing rock blues Goodbye Jimmy Reid on which he plays harmonica – an upbeat tribute to the blues giant. To those having a free voice. When Dylan said, ”Thank you everybody, Hope you are all well.” For their final song the band performed Every Grain of Sand – and with band introductions.

After which the band and Dylan lined up centre stage, then exited and came back for a final bow, when there was a rush of applause when I thought how much Dylan’s songs and music have meant to so many, and especially for those musicians in his footsteps (and for me). Like the Scots bard Robert Burns, Dylan looks back to the great writers before him and also to what lies ahead.

I might have hoped, as in 2011, Dylan had encored two of his classics (Rolling stone, All Along the Watchtower), but this show was about new material mostly and we left grateful, satisfied and thankful.  He sits at the turbulent crossroads. He continues being the journeyman bringing his messages of a better way. Hope of those journeys, Fear of time taking us all.

In my life by far, his long life of music and poet of our times. I’ll cross that Rubicon to the Promised land. Take me to the river – free me from sin. Will he still be touring at 80, still the journeyman, journey home. The Never ending Tour runs through 2024. 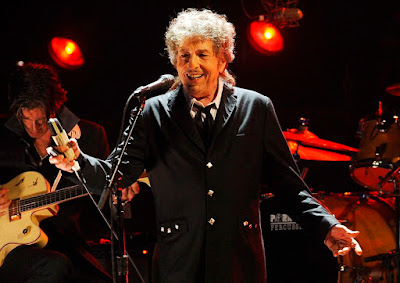 This is Bob at his classic and contemporary best! This is my third Dylan concert. First was with my son at the SECC Glasgow, when Dylan was hunched over his keyboards. The second gig, 2011, was a much livelier Dylan performance at the Braehead arena, where Dylan even danced! And we stood alongside his long-standing disciples at the front. The fan beside me was my age and also with his son and he had been to every Dylan concert here since his first one in Scotland – at the age of 18. It was a humbling experience and Dylan performed several of his classic songs (set lists are online)

Dylan clearly much prefers the smaller venues and this concert in 2022 at the Armadillo was more intimate and old worldly, took us back in time, before mobile phones, before internet and before flashing lights, glitz and glamour- when we could simply be in the moment to listen clearly to the quality, aged instruments, to the changes in tempo, clarity, depth, resonance and range of voice. We’ve forgotten today how to be in the moment, how to look or listen, as we disappear into our virtual realities.

I hope Dylan continues on his ever ending world tour and continues to write and perform such memorable and hard hitting words and music. And that I get to hear him some more live – it’s a surreal and uplifting experience.

When I make my Masterpiece

My Own Version of you

*I’ll be our Baby Tonight

*Be Alone with you

I’ve made up my mind to give myself to You

Neil McCormick on the Telegraph, as “one long magnificent ride for his most loyal fans and “The wise old poet has stirred up a cryptic cauldron of truths and clues, philosophy, myths and magic.”

“Breath of its cultural references and the depth of Dylan’s lyrics ‘ Mikal Wood Los Angeles Times.

“why are intellectual references so rare in contemporary music.”

“ a poetic balm for a world in profound turmoil.”

Bob Dylan, All the Songs, Philippe Margolin and Jean Michel Guesdon, claim R & R is placed between Highway 61 Revisited, Blond on Blonde and Blood on the Tracks, and in other words on the same level as his master works. Several stand out tracks are singled out for mention – Key West, I Contain Multitudes, Black Rider.

Rough and Rowdy Ways album -  is the 39th studio album by American singer-songwriter Bob Dylan released on June 2020, through Columbia Records.It is Dylan's first album of original songs since his 2012 album Tempest following three releases, one a triple album a triple album that covered traditional pop standards. The album was recorded at Sound City Studios in January and February 2020. The session musicians included all of the then-current members of Dylan's Never Ending tour band alongside other musicians, such as Blake Mills and Fiona Apple. The album's sound was described by critics as Americana, folk, blues and R & B.

Rough and Rowdy Ways was preceded by the singles "Murder Most Foul", "I Contain Multitudes" and "False Prophet", "Murder Most Foul" became Dylan's first song to top any US Billboard chart. The album was universally praised by critics, described as being one of Dylan's best works and placing highly in many year-end album lists, including the top spot on four lists. It peaked at No. 1 in more than ten countries and No. 2 in the United States and Australia.

Surrounding Dylan, leaning in like heliotropes, are three guitarists playing electric, acoustic, lap steel, mandolin and fiddle (the latter three are by Donnie Herron, and not all at the same time). Longtime electric upright bassist Tony Garnier plucks away next to newbie Charley Drayton, a loose and bouncy drummer who seems to make contact with his kit via anything but wooden sticks. The transitions between the songs are jazzy and fantasia-like, as though each cut played is conjured afresh out of a shimmering ether.

Crucially, there’s an air of playfulness here – testament to Dylan actually being in a very good mood