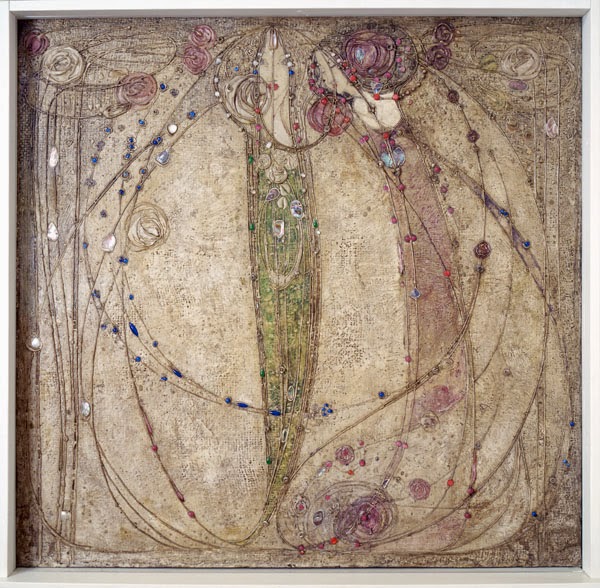 There is a big exhibition of Rennie Macintosh's work at the Huntarian Glasgow. I am a great admirer of his work and it was devastating about the Glasgow Art school fire this year.
His wife Margaret MacDonald, I probably admire her work even more - and her exhibition is away in Helensburgh. I've been writing on women artists recently - and they are usually treated as second class or ignored and hidden away. I notice too how often female artists are referred to as - collaborating with their partners, or being painted by them - when the reality is that these women artists were strong independent artists in their own right.
Margaret influenced the wonderful Austrian artist Klimt and others.
Macintosh credited her with being an important part of his figurative and symbolic interior designs. "Remember, you are half if not four-quarters of all my architectural...Margaret has genius, I have only talent."

Margaret MacDonald, (1864 Scotland) She was celebrated for her panels in Glasgow's famous Willow Tearooms - The May Queen, and Oh ye, all ye that walk in Willowood. Along with her husband Rennie Macintosh and Herbert MacNair, she was one of the most influential members of the collective known as the Glasgow Four. She exhibited with Mackintosh at the 1900 Vienna Secession, where she was an influence on the Secessionists Gustav Klimt and Josef Hoffmann.

....and yet John wrote the deeply caring song 'May You Never', all very poignant really.


I also used to wonder about the artist Margaret Macintosh, the wife of the better known Glasgow artist Rennie Macintosh. She was first a collaborator with her sister, and later with her husband, the architect and designer Charles Rennie Mackintosh. Macdonald was celebrated in her time by many of her peers, including her husband who wrote, "Remember, you are half if not four-quarters of all my architectural...Margaret has genius, I have only talent." It is not known exactly which of Charles Rennie Mackintosh's works Margaret was involved with but she is credited with being an important part of her husband's figurative, symbolic interior designs.  These include the Rose Boudoir at the International Exhibition at Turin, the designs for House for an Art Lover and the Willow Tea Rooms. Her best known works include the panel The May Queen, which was made to partner Mackintosh's panel The Wassail for Miss Cranston's Ingram Street Tearooms, and Oh ye, all ye that walk in Willowood, which formed part of the decorative scheme for the Room de Luxe in the Willow Tearooms. Together with her husband, her sister, and Herbert MacNair, she was one of the most influential members of the collective known as the Glasgow Four. She exhibited with Mackintosh at the 1900 Vienna Secession, where she was arguably an influence on the Secessionists Gustav Klimt and Josef Hoffmann.


There have been some outstanding women photographers.
Great Women Photographers include Eve Arnold and Dorothea Lange (Migrant Mother).


Dorothea Lange 1895 – 1965 was an American photo journalist, best known for her Depression Era work for the Farm Security Administration ( FSA).  Her photographs drew attention to the plight of migrant farm workers, rural poverty and exploitation of share croppers. Her husband, economist Paul Taylor, interviewed and took economic data over the plight of migrant workers while she photographed and they documented rural poverty and the exploitation of share croppers and migrant labourers.  Her photos led aid being sent to the camps. Eve Arnold, 1912 - 2012 was an American photojournalist. She joined Magnum Photos agency in 1951 and became a full member in 1957. Her interest in photography began in 1946 while working in a photo-finishing plant and she learned photographic skills from at the New School for Social Research; She went on to photograph many iconic figures – including Marilyn Monroe. She left the United States and moved permanently to England in the early 1960s. While working for the London Sunday Times, she began to make serious use of colour photography. She received the Lifetime Achievement Award from the American Society of Magazine Photographers. She did a series of portraits of American First Ladies. She received an OBE in 2003.
There are many great women writers -  Virginia Woolf, Jane Austen, Sylvia Plath, Emily Bronte, George Eliot, more. I attend the Edinburgh International Book festival (EIBF) each year and in the book world there is a true equality - its' all about the craft and substance.
In music in recent years there has been a rise in woman musicians gaining attention, as opposed to decorative woman singers. In the UK in particular there has been new strong solo women who play, write and perform – Adele and Emeli Sande.


I have read of many out standing woman artists down the years – the question is how many of them have been able to break thorough and most have been left in the shadows of their better known partners. The women have been left with the day to day chores of raising children and keeping the home going. Of course being a mother is and should be the most rewarding  job of all - and it is. I have raised three children and it is also very demanding (!) on a woman's time and energies. In the UK in particular, the role of homemaker as it is known in the States, is undervalued and not treated with the respect the role deserves. In America mothers are given more respect as they are after all the bedrock of society. I don't know why.

Even in today's world of equality were many women are the main wage earners it falls to their lot to also be the main homemakers too. So this is a few words here to the forgotten woman artists and writers.. and a special few to those woman who are breaking free.
Perhaps women need to feel they can be equals in the creative arts - particularly in art and music.
To name but a few of the great women behind the men. I am certain there are many many more.