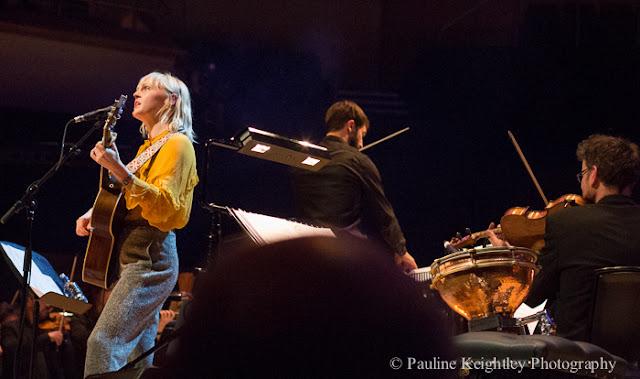 So I arrived early as people are setting up their stalls – of accordions, pipes and folk CDs. Roddy Hart and a camera crew were in the concert hall foyer and the Press office has wine and nibbles set out. Someone was playing piano and they were setting out equipment for the open mic. And so #ccfest begins for another year to celebrate live music, special collaborations, brilliant musicianship and perfect singers who perform quality songs. On the stage the orchestra limbers up tuning their instruments.

Sometimes Celtic Connections offers some gems and there were several tonight. The first set for this evening’s celebration of women and song, included six talented artists backed by the Scottish national orchestra (RSNO).

Scottish songwriter Karine Polwart performed songs from her Wind Resistance. She read a poem of new president Trump. ‘’I am worn but I am not consumed,’ a message from the rocks of Lewis to the son of Mary MacLeod. She also sang ‘Cover Your Eyes’ and ‘Half A Mile’. Karine wrote a performance piece, Wind Resistance, for the Lyceum Edinburgh which will be performed at the Tron theatre during Celtic Connections. While the orchestra added rich depth and resonance. 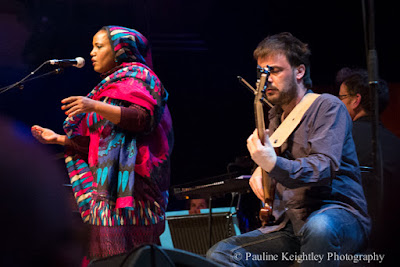 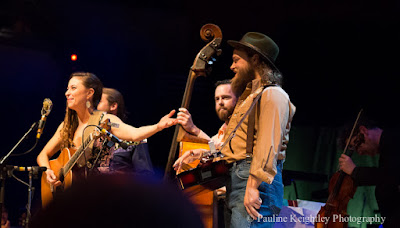 Adam Holmes and Rachel Sermanni sang with lilting country harmonies. There was a moving and colourful performance from Aziza Bahim from the Sahara and her quality band. Her joy of music has brightened her life in an Algerian refugee camp. An important part of Celtic Connections is to bring different cultures together and to look at the plight of those suffering great hardship.

Cara Dillon has recorded with an orchestra, so this was a familiar setting and she sang the traditional song ‘She Moves Through the Fair.’  Lindsay Lou and the flatbellys  entertained with their fun rhythmic American tunes. While Declan O’Rourke was another hit with his large voice he sang ‘Who puts the rainbow sin the sky’ with the song Slieve Bloom and Galileo. 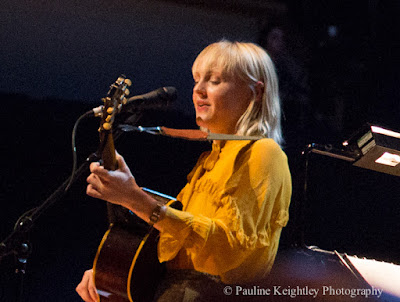 **For the second half of this quality concert Laura Marling gave a still, introspective, both fragile and strong performance. She stood centre stage with the orchestra behind her and sang her journey in song, with words such as ‘I will not be a victim of romance.’ On one song she tells herself to ‘Breathe!” She shuns celebrity trappings, a child of nature with no make-up. She sang ‘I love England in snow… I ’m on my own and I feel like running.’ Her songs of winter, romance and memories. There was also a nod to Leonard Cohan with the song Avalanche.

She is an accomplished, moving artist. She performed a stunning suite of her songs ‘Take The Night Off’, ‘I was and Eagle’, ‘You know’ and ‘Breathe’, composed by Kate St John. She also sang – ‘What He Wrote’, ‘Sophia’, ‘Hope in the Air’, ‘Goodbye England’.

Her voice is both gentle, doubting and questioning with the nuanced voice of Joni or the hard edge of Dylan. Marling has spent time in LA – has she had time to live though? Laura began her career at the young age of 17. She is an award-winning English folk singer songwriter and at 26 she has been prolific with the release of five studio albums.
This concert offered tasters of some of the outstanding artists who will perform at Celtic Connections this year.

II   On the Radio on the way home I heard the young band Rura (who perform at the Barrowlands at Celtic Connections) who talked of their fun on the road touring. Is that really why Dylan got a band and went rockier In my view some of the greatest art is about collaboration with other artists, both past and present.

SUITE of Take the Night Off/ I was an Eagle/ You know
What He Wrote/ Sophia/ Hope in the Air/ Avalanche/ Goodbye England.

Celtic Connections is a major folk and roots festival running over 19 days and 19 Glasgow venues (begun in 1994) celebrates its 23rd year.