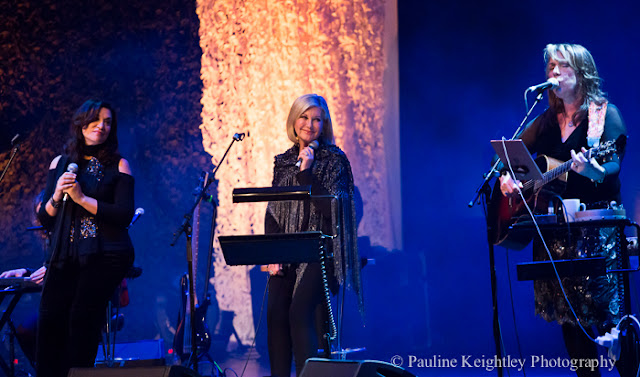 A hopeful and life-embracing evening of song, togetherness and support to lift the spirits and also to heal.
Australian, American and Canadian, singer songwriters Olivia Newton-John, Beth Nielsen Chapman and Amy Sky shared their grief journey songs on their collaborative LIV On: ‘A New Album to aid & Comfort Those Experiencing Grief & Loss while using the power of music to heal’.
The set moved seamlessly even though this was only their second gig together and was led by Nielsen Chapman as musical director. She sang her well loved songs – ‘Sand and Water’, ‘You Don’t Know what to Say’, ‘This Kiss’ and ‘Christmas Song’. 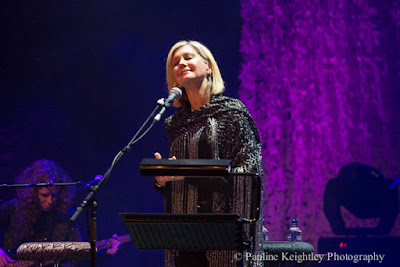 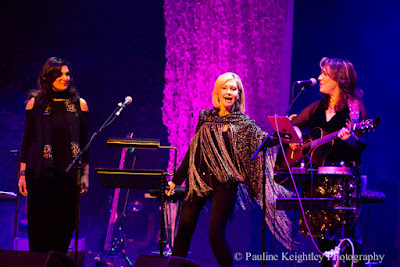 Canadian Amy Sky played piano on several songs including her moving song ‘Forever Blue. She also performed a dramatic ‘Phenomenal Women’, which had words by the poet Maya Angelou.
Meanwhile Olivia sang some of her best loved songs – ‘Love will See Us Through’, ‘Grace and Gratitude’, ‘I Will Always Love You’. She also performed the signature song ‘LIV ON.’  We all remembered Newton-John from the famous Grease movie. She looked well and had great rapport with the concert hall audience. She also performed her songs perfectly, expressing exactly the right mood and feel for the concert and songs.


They sang of their love and strength, of redemption songs. They sang with gentle, poignant harmonies and piano of how love will see us through. They also opened up to the audience for their own stories of grief.

This concert was about the journey of grief we must all travel to release the pain, but more than this, it was about the destination of acceptance. For their finale they clapped and smiled and sang the hit song ‘Happy’. Phil Cunningham joined them on stage and they also sang a restoring ‘Do not stand at my Grave.’

While of course Olivia was very much the star!

They were very well supported by the talented fiddler John McCusker and his band with wondrous reels and slower tunes, when they were joined on stage by the singers Heidi Talbot and Adam Holmes.