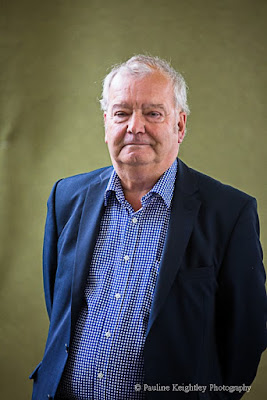 Silence of the dispossessed: Give them back their voice.
No peasant happily gives up his land…
Was there protest, what happened?
Lack of lasting folk tradition of removal, no trace of what went before….
An Elegy for those who’ve gone, reconstruct world no longer there…
The aching beauty, the autumn when the bracken is down,

Devine spoke of the dispossession and social changes of the early 19thcentury. The connections to the land was severed and the cottar, the tenant farmer vanished. He claims these Clearances were more thorough in the Scottish Lowlands. Devine has been pursuing research on the devastation of the Lowlands for many years with his team of researchers. They searched in the kirk sessions records for notice of removals.

From the mid 18thcentury onwards, land improvement meant there was the transition to the - one industrialisation and, two urbanization revolution and three a corrosive transformation of the countryside. The old farm toons were swept aside for centres of farm settlements. Instead now there were landless farm servants, and wage labourers. The will of the landowners ruled and no newspapers reported these Lowland clearances.  In 1720 Galloway lairds set up large ranches parks for cattle and sheep. There was severe dislodgement. Scotland became a grossly unequal society.


He spoke of the resistance of the Levellers revolt who knocked down stone dykes. In 1724, huge numbers of armed gangs, of men, women & children roamed the Galloway countryside levelling dykes built around the expanding number of cattle fields. These cattle fields were introduced by landlords as far back as a century earlier in a bid to make the land more profitable to them, but it was only in the 1720s that the revolt, later named the ‘Leveller’s Revolt’, became widespread and worrisome enough that armed guards were called in to protect the fields and quell dissent. The revolt gained national attention from the church, state and even the King. In this extract, taken from The Scottish Clearances, author Tom Devine looks at the factors that contributed to this very specific armed resistance.

The clan chiefs lived in fine houses in Edinburgh. Later the sheep ranchers moved into the Highlands. The lawyer Thomas Muir attempted constitution reform, when only 0.12% had the vote (1832 Reform Act) and he was tried and deported for these views.

*The Scottish Tourist board markets Scotland for its solitude and tranquillity. He spoke of the false “victimhood in a kilt” put forward by the Prebble books: of the decline of Scotland over the past centuries and the scale of emigration. All the film, drama, literature is on the highlands as the soul of Scottish identity. Many Scots moved out to try to run the world. There were those many Scots on the make!

Devine spoke passionately about how important it is to understand the truths about our past stories. “A mature, democratic nation recognises its real history with critical and uncomfortable questions.”
“We must face the past, and not politicise or mythologize it. Social memory makes us who we are and to understand modern nations if we know where it came from. There are real scholars out there, with clear thinking and good research.” Devine is clearly one of them!

Devine was interviewed by journalist Alan Little.
Sir Tom Devine is Scotland’s leading historian and he came out in support of Scottish Independence in 2014. Devine lectures and publishes books to address the widespread ignorance of most Scots of their recent histories, heritage and past stories. 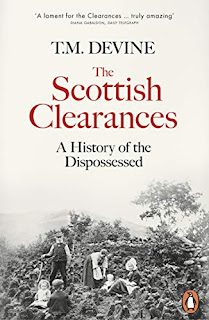 The Lowland Clearances were one of the results of the Scottish Agricultural Revolution which changed the traditional system of agriculture which had existed in Lowland Scotland, in the seventeenth century. Thousands of cottars and tenant farmers from the southern counties (Lowlands) of Scotland migrated from farms and small holdings they had occupied to the new industrial centres of Glasgow, Edinburgh and northern England or abroad, or remaining upon land though adapting to the Scottish Agricultural Revolution.

Extract taken from The Scottish Clearances: A History of the Dispossessed, 1600-1900By Tom Devine
Published by Allen Lane
Part of the answer might be found in the economic sphere. By the early eighteenth century the big cattle farms were beginning to encroach on, and enclose, open or common grazing grounds, the ‘commonties’ referred to earlier in the chapter. That process would have proven a serious threat to peasant communities which were not subject to direct eviction. They would have experienced profound problems from strategies which menaced the tight margins of their household economies.
The slender balance between subsistence and shortage might have been squeezed by the annexation of common lands. Again, there is evidence that not only landowners but tenant farmers had tried to exploit the new post-Union market opportunities in the cattle trade. Some had invested in more stock because of those possibilities. Now, however, as ‘parking’ intensified, they stood to lose the vitally important access to the common grazings for the livestock they had purchased at great risk. For them and their families, descent into penury and beggary might follow.
There was also the economic context of the Galloway clearances to be considered. As argued in Chapter 4, in parts of the central and eastern Borders, the dispossession of small tenants and cottars to make way for larger sheep runs was paralleled by the growth of cottage industry and employment opportunities for the displaced in the towns of Kelso, Hawick, Selkirk and Jedburgh.
But these alternatives were not available to anything like the same extent in Galloway, where woollen working and other manufactures were much less developed. It is likely, therefore, that the poorer rural communities in the western Borders were faced with a much narrower set of options: acceptance of ‘parking’ and eventual likely eviction, or violent resistance in an attempt to reverse the transformation of the old agrarian society. . .
In addition, however, we also need to probe the complex world of west Border political and religious history in order to provide a comprehensive explanation for the Levellers’ Revolt. Arguably it is there that the distinctive origins of the disturbances can be found. Several aspects of the recent Galloway past are relevant to the analysis.
The long Covenanting tradition of south-west Scotland was important. The restoration of King Charles II in 1660 led once again to the rule of bishops in the Presbyterian church. This action was thought heretical and oppressive by many pious communities and their ministers, and in open conflict with the sacred Covenants between Christ and his church established during the civil wars of the 1640s. As a result, many clergymen left their parishes and held alternative open-air services or conventicles. These were soon outlawed by the state as treason and the army then enforced the will of the King, often in a particularly brutal fashion. This period, known as the ‘Killing Times’, is still marked in the countryside around Wigtown, Kirkcudbright and Dumfries by the many memorials to the martyrs who defied the civil authorities and faithfully clung to their ideals despite savage state oppression. Galloway remained a hotbed of Covenanting activity despite the draconian policies of the monarchy.
Not surprisingly, the majority of the population were therefore enthusiastic about the removal of the Stuart king, James VII and II, in the ‘Glorious Revolution’ of 1688–9. But then the Jacobite Rising of 1715 rekindled the old fears of a Stuart counter-revolution. Bitter memories were revived, not simply of the Killing Times, but also of the many years of Presbyterian struggle between the signing of the National Covenant in 1638 and the Revolution of 1688.