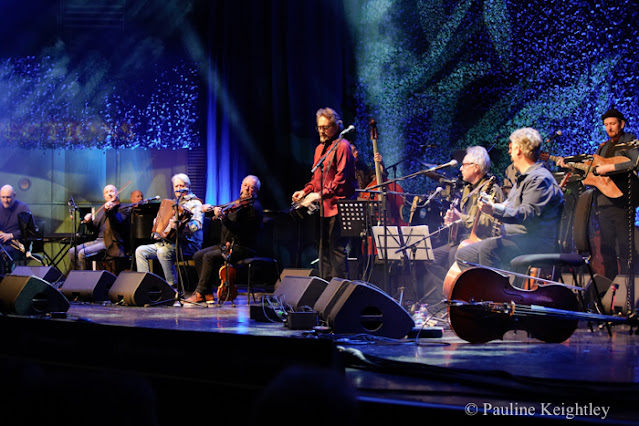 The Transatlantic Sessions concert celebrates the important connections between Scots, Irish and American traditional music. Those sometimes forgotten stories of emigration across the rough seas in often small wooden sailing ships, with so many hopes and dreams of building a better life and enjoying democratic freedoms – and they took their old ballads and tunes with them. Sometimes they had no choice.

And it’s important to remember.

Fiddler Ali Bain toured in the States, decades back, and after he enjoyed his special collaborations there, he was a part of setting up Celtic Connections 29 years ago in 1994. Normally Celtic Connections welcomes 80 musicians from America – festival director Donald Shaw said, “but due to all the Covid restrictions for this year only five Americans were able to make it across and they are all on stage tonight!” 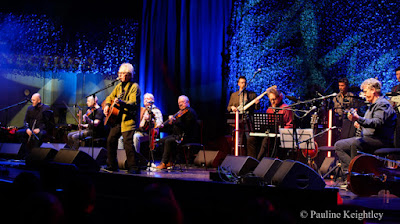 The TS 2022 included veteran, long standing members along with new faces, From the States and US roots music we were treated to the talent of is a Grammy-award winning American singer songwriter Sarah Jarosz. She has a quiet stillness and one of those hypnotic voices that pulls you in. She sang Orange and Blue, Blue Heron, Hometown and Dylan’s Ring them Bell.

New faces also included, Haitian-American musician Leyla McCaila sang Merci Mon Dieu with her cello and is an earthy and soulful singer (previously with the band The Carolina Chocolate Drops)  Award-winning and talented Scots singer songwriter Siobhan Miller sang traditional songs May Morning Dew, Honest Man and her own song Drifting and was clearly thrilled to have joined this elite band!

Long standing member Dirk Powell from Kentucky, he is a leading expert of Appalachian music. He performed songs of his family’s inspiring history; Bright Light of Day, Waterdown and Walking Through Clay, He said its important to tell our stories and spoke of his grandfather carving his name on an old tree with his young hopes.

Popular Irish musician Paul Brady was another highlight and performed a top class show finale when he sang Concert Going, and Harvest time. Followed by a grand finale which was as always of exhilarating Scots tunes. A special mention for the talents of the band’s outstanding musicianship, they don’t come any better than this! 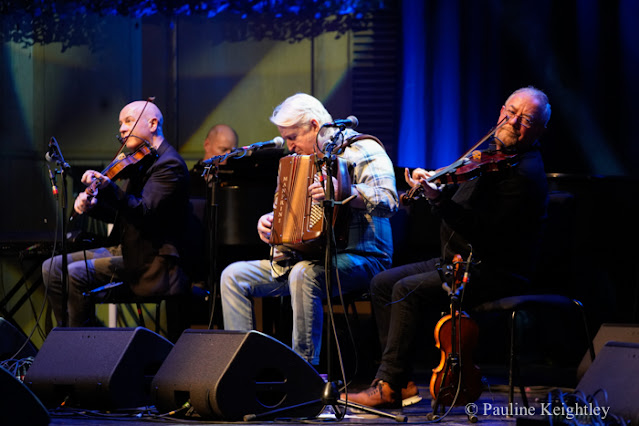 Highlights from the wide variety of styles – Dirk Powell’s Waterdown, Sara Jarosz’s vocals along side Douglas’s dubro and Daniel Kimdro on double bass. And of course Ali Bain’s accomplished Shetland fiddle – Phil told how his musical partner Ali, after 35 years playing together, told him how talented he was!

Long may we be treated to such accomplished musicians! I hope there will be some recordings of the Transatlantic sessions to enjoy on YouTube! I highly recommend checking out.

Dirk Powell is an American fiddler, banjo player from Kentucky and a leading expert of Appalachian music. He has won several Grammys.