Is there A NEW Scottish Writers Museum 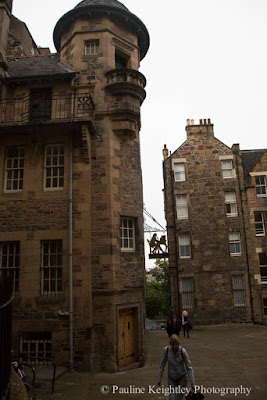 I saunter through the energy of the Fringe performers on the High Street. I walk along George street, on up the Mound and on down the high street.  I eat at  Bilbos on the corner of Chambers St.
I stopped in at the very small Scottish writers museum up a small winding stair in a hidden close at the top of the High street. There are exhibits to Robert Burns, Robert Louis Stevenson, and Walter Scott. Apart from a few Burns paintings and a display of the  Kilmarnock first Edition of his Poems - there is not a lot here.

I asked the lady there about a possible new museum. I said I had visited the Irish Writers museum which is housed in an impressive Georgian mansion and is 50 times bigger
There was talk of putting a decent size Scottish Writers museum beside the National library.

There are no modern authors or women writers or any of Scotland’s great philosophers of the enlightenment; Where is Robert Fergusson who wrote of Edinburgh and inspired Burns to write in Scots? Where is Adam Smith, David Hume, Allan Ramsay, Arthur Conan Doyle, Hugh MacDiarmid, James MacPherson or JM Barrie?

At an Irish concert at Celtic Connections I mentioned to an Irish lady beside me about the interesting Irish Writers Museum – she said perhaps there weren’t enough good Scottish writers!  I hope one day she might be proved wrong and we might have as Scottish Writers Museum that truly reflects not only this great city of Literature and  also the MANY great Scottish writers and artists.

In 1786 Scotland’s greatest poet – and one of the world’s greatest poets – made his way on a borrowed pony across the lowlands from Ayr and on into Edinburgh. At the time they were building the Georgian new town. He came in order to try to get the second edition of his poems published. He went to find the grave of the poet Robert Fergusson, who also wrote in both Scots and English. He stayed in a close near the castle and met many of the great and good of the capital – it was all a New World for him. 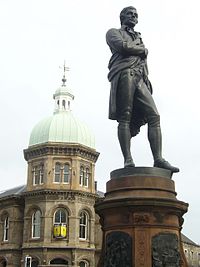 And where is any Edinburgh statue to Burns?
There is no a statue to Robert Burns, one of the greatest poets and songssmiths who ever lived in the centre of Edinburgh. I learnt recently there is a statue to Burns at the bottom of Leith walk, I used to pass every day only way to secondary school in Newhaven, near the Forth river. It really is a shocking state of affairs which makes me think Burns (while he tried) wasn’t considered unionist enough by the powers that be – not compared to the tall Gothic spire to Walter Scott in Princes street anyway. And A Mans a Man for A That as too egalitarian and feared by upper classes….. (votes for all was not until after WW1).