Admiral Cochrane – Named by Napoleon, "the sea wolf', he never lost a sea battle. After exclusion from the Royal Navy he assisted other country's to achieve their independence.

Thomas Muir – Votes for all reformer.

Charles Rennie MacIntosh – Architect for a simpler beauty of design

The scale of contribution of physics and medicine.

Lord Thomas Cochrane, 10th Earl of Dundonald (1775 – 1860), British naval Officer of the Royal Navy, mercenary and radical politician. He was a daring and successful captain of the Napoleonic Wars, leading Napoleon to nickname him Le Loup des Mers ('The Sea Wolf'). He was successful in virtually all his naval actions. He was dismissed from the Royal Navy 1814 following a controversial conviction for fraud on the Stock Excahnge. He helped organise and lead rebel navies of Chile and Brazil during their successful wars of independence1820s. While in charge of the Chilean Navy, Cochrane also contributed to Peruvianindependencethrough Freedom Expedition of Peru. He was also asked to help the Greek Navy but was prevented by events from having much impact.
In 1832, he was pardoned by the Crown and reinstated in the Royal Navy with the rank  of Rear Admiral of the Blue. His life and exploits inspired the naval fiction of 19th- and 20th-century novelists, particularly the figures of C. S. Forester's Horatio Hornblower and Patrick O'Brien's protagonist Jack Aubrey.
John Maclean (1879 – 1923) a Scottish schoolteacher, and revolutionary socialist, Red Clydeside. He was notable for his outspoken opposition to the First World War which caused his arrest under the Defence of the Realm act, and loss of his teaching post, after which he became a full-time Marxist lecturer and organiser. In April 1918 he was arrested for sedition, and his 75-minute speech from the dock became a celebrated text for Scottish left-wingers. He was sentenced to five years' penal servitude, but was released after the armistice. Maclean believed that Scottish workers were especially fitted to lead the revolution, and talked of "Celtic communism", inspired by clan spirit. In captivity, Maclean had been on hunger strike, and prolonged force-feeding had permanently affected his health. He collapsed during a speech and died of pneumonia, aged forty-four.
James Clerk Maxwell (1831 – 1879) Scottish scientist in mathematical physics, His most notable achievement was to formulate the classical theory of electromagnetic radiation. bringing together for the first time electricity, magnetism and light as different manifestations of the same phenomenon. Maxwell’s equations for electromagnetism have been called the "second great unification in physics"[ after the first one realised by Isaac Newton. With the publication of “A Dynamical Theory of the Electromagnetic Field”
in 1865, Maxwell demonstrated that electric and magnetic fields travel through space as wavesmoving at the speed of light. Maxwell proposed that light is an undulation in the same medium that is the cause of electric and magnetic phenomena. The unification of light and electrical phenomena led to the prediction of the existence of radio waves. 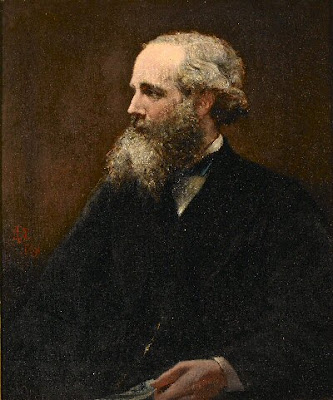 Many Scots artists, writers, scientists and explorers and more have been airbrushed out of history (as have many women!).

I  James Clerk Maxwell;  I recommend BBC Scotland's TV program on one of the world's greatest physicists - James Clerk Maxwell
One of Edinburgh’s many great intellectual sons: James Clerk Maxwell (1831-79), the titanic Victorian scientist whose work was described by Albert Einstein as the “most profound and the most fruitful that physics has experienced since the time of Newton.” His genius touched pure mathematics, electromagnetics, optics (color theory), kinetic theory and thermodynamics, astronomy (the rings of Saturn), and many other disciplines. He was also a poet

He was the shoulders on which Einstein stood and he kept a photo of him on his wall. When the Berlin Wall came down engineers from East Germany came over to Ayrshire to visit Maxwell's grave. Yes in Germany scientific inventors and engineers are highly regarded!

Yet in his home country of Scotland Maxwell is virtually unknown...... Scotland and the north of England were once the great centres of scientific, engineering excellence and manufacturing. In 2008 and statue to Maxwell was unveiled in George street, Edinburgh.
II  The Scottish suffragettes.  In the recent movie Suffragette, the role played by the Scottish suffragettes are totally ignored.

Flora Drummond, “The General”, who rode a white horse at the head of marches and Marion Wallace Dunlop (a descendant of William Wallace) who pioneered the hunger strike as a political protest. Dunlop was eulogised by George Bernard Shaw, who called for a statue of her to be placed in Trafalgar Sq. In Scotland the cause spread far and wide. King, the curator of the People’s Palace in Glasgow from 1974 to 1991, who was a driving force behind its acclaimed collection of women’s suffrage artefacts, says the movement was more radical in Scotland. Councils and churches put their shoulders to the wheel too. “What didn’t happen in England, but did in Scotland, was you would get a lot of the  authorities making statements in favour of women’s suffrage and support from a lot of the ministers.  The Church of Scotland was pro-suffrage and ministers spoke for votes for women.”

There was also a Mary Barbour
- there has been a recent campaign in Glasgow for a statue in her honour. (1875 - 1958) was a Scottish political activist, councilor and magistrate. She was closely associated with the Red Clydeside movement in the early 20th century and especially for her role as the main organiser of the women of  Govan who took part in the rent strikes of 1915.

Remembering the Scots at the heart of the suffragette movement by political editor Alison Rowat  - http://www.heraldscotland.com/arts_ents/film/13838704.Remembering_the_Scots_at_the_heart_of_the_suffragette_movement/?ref=rss

Also Labour party founder Kier Hardie had a close relationship with Emmeline Pankhurst.  Scottish ministers even preached for the votes for women. In fact it appears that Scottish voices led the way in this crucial movement...

III  Scotland and The Easter Rising:

Scot James Connolly, as were many other Scots, was a major player in Ireland's struggle for Ireland's independence. Next April will mark the 100 year anniversary of Ireland's Easter Rising. Connolly was a founder of both the Irish Socialist Part and of the Scottish Labour party, long before Keir Hardie. The present Labour Glasgow city council believe any mention of Irish independence is too controversial a topic though to mark the anniversary in any way!  Old prejudices die hard it seems. Connolly was also the brother of well respected Scottish journalist Ian Bell's grandfather (who sadly died recently).

Even our Scots language is not recognised as an official language. Linguists accept the status of Scots as a language. Recently Osborne announced the BBC will not support the Gaelic language channel BBC Alba.  Of the £335 m raised in tv licence fees in Scotland - only £35m is spent on Scottish tv production.

V   Secularism versus
For me questions of how we are governed are nothing to do with religion, which should be a private rather than state matter.  This war of ideology with Muslims is really over whether religion should be part of government?? Religion needs to be taken out of schools and other institutions.

and Independence
The term 'Independence' seems too strong a word for many in England - who apparently feel they are being very nice by helping us folks in Scotland out!  This is quite simply about de-centralising and growing up here in Scotland and running our own affairs - while still maintaining very close ties with the rest of these islands. .. Well perhaps we need to be more radical and have our own currency that is not tied into the world banking system...??

We urgently need informed debates on these topics for Scotland - AND not by political parties - but by business people, scientists, economists etc.

Does all this matter? Should or does history represent as truthful a view of the past as possible? We might argue history is always limited or represents one viewpoint.

Well yes it does, especially in today's world of mass communication. There is no reason to hide the truths.