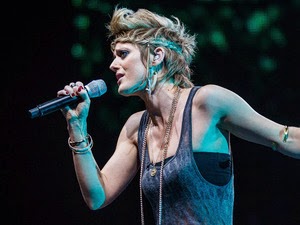 I was googling for info online and found Bo Bruce, a finalist on The Voice UK
She said the BBC spent no money on promo by The Voice, by comparison to the money spent by ITV on its shows – such as X factor. That acts appearing on The Voice UK are likely to fail once the show comes to an end.

The finalist stated that the BBC has too many restrictions when it comes to promoting acts in comparison to other channels. Leanne Mitchell’s debut album only reached no 134 UK album chart, and her single 'Run To You' peaked at 45.
"They just put out a single and didn't really advertise the fact that it was out there and available to buy..Normally you would have a huge marketing campaign before a big release. But you can't do that when you have won The Voice."
"Being part of the BBC, they can't be seen to do that. They have far more restrictions. If you look at The X Factor, they are allowed to heavily promote an artist or a singer. Because of that, they almost always have at least one number one single."

"BBC producers are not able to take control of the winner's career in the same way Simon Cowell does for his shows. I'm really glad I didn't win because it meant I could take my time.  Personally, it is better to be runner-up as there's less pressure to have an instant hit." Danny O'Donoghue said: "That's not the fault of the BBC. you can take an artist like that and question their work ethic."
http://www.digitalspy.co.uk/the-voice-uk/the-voice-uk-acts-are-doomed-to-fail-on-bbc-says-bo-bruce

The reality of course is that the BBC can't be seen to spend money on things like the media hype for a contestant ( the BBC has no revenues from advertising).


Entrants to these Tv show should view them as a platform or showcase. for some exposure. Reality shows are intense short-term spotlights and anyone searching for a longer term career in music should look for other opportunities to showcase – such as the slow burner approach online and those at the small venues.

These shows create a false bubble for young people's expectations and therefore it can often be hard to deal with let downs, and with some entrants being as young as sixteen. It is necessary to be aware of these limitations and have your eyes open to the artificial nature of these reality tv spotlights.