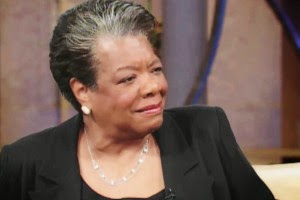 Maya was best known for her book ‘I Know Why the Caged Bird Sings’, 1969, which brought her international acclaim. She died yesterday May 28 2014 and I was sad to hear of her loss.
Her books centre on themes such as racism, identity, family, and travel. Angelou is best known for her autobiographies, but she was also an established poet.  She inspired many.

She was a journalist, activist, novelist and poet as well as many other things. I was reading her Wiki page, goodness!  She was also a dancer, actress, singer, composer, screen writer, professor, lecturer, traveller and more. Angelou (not her real name) was also a mentor to Oprah Winfrey. In 2011 she received the Presidential medal of honour.

She used elements of the Blues, including the act of testimony when speaking of one's life and struggles, ironic understatement, and the use of natural metaphors, rhythms, and intonations. Angelou, instead of depending upon plot, used personal and historical events to shape her books. She considered herself a teacher who writes and she found relief in "telling the truth." Gillespie spoke of the ‘breadth and depth of Maya Angelou's spirit and creative genius"

Maya wrote one of my favourite poems. She lived through hard times and her spirit won through. Who's to say that those same struggles too are what defines us?

Love builds up the broken wall
and straightens the crooked path,
love keeps the stars in the firmament
and imposes rhythm on the ocean tides
each of us is created of it
and I suspect
each of us was created for it.'

'I believe the most important single thing, beyond discipline and creativity is daring to dare.' Maya Angelou 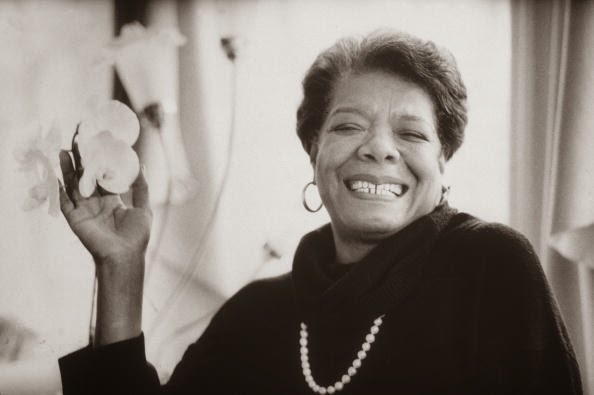 ‘The most noble cause known to man is the liberation of the mind and spirit. ‘
‘All my work, my life, everything I do is about survival, not just bare, awful, plodding survival, but survival with grace and faith. While one may encounter many defeats, one must not be defeated.’  Maya Angelou
http://maya-angelou-birthday_