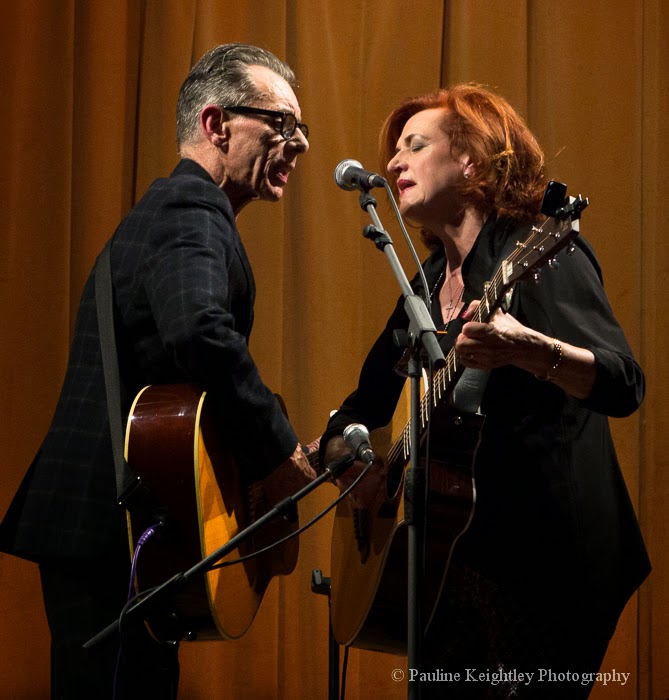 Songs by Rab, songs by Barbara. Songs together.
Rab and Barbara gave us a real treat with a showcase gig of their favourite songs. They both looked well and clearly enjoyed sharing the stage together.
Rab looked smart in a dark checked suit while Barbara was glamorous. They spoke of how they met in the 60s at Sandy Bells bar Edinburgh.

We were then given alternate solos by Barbara and Rab.
We heard some of Rab’s excellent and well crafted songs, such as his song for Gerry Rafferty No More Time. Rab said he first met Gerald at Billy Connolly’s house, when they were in the band Stealers Wheel together. Rab also performed I’m Walking Here from his new album and the murder ballad, The Two Sisters. Noakes sang a Dylan cover and as he is a big Dylan fan he is rather excellent at doing Dylan.

To my delight Rab performed his well remembered ‘Branch’ which received good radio airplay and that he performed a few years back now on the Old Grey Whistle Test. I’ve seen Rab live a few times and this was the first time have heard the song live!

Barbara sang a haunting song by Charlie Dewar, The Same Sky and a very charming rendition of one of those beautiful story folk ballads, the classic Scottish love song Rigs O Rye (which are like little treasures). She spoke of her first working with the folk legend Archie Fisher and of her shirt boxes of songs. 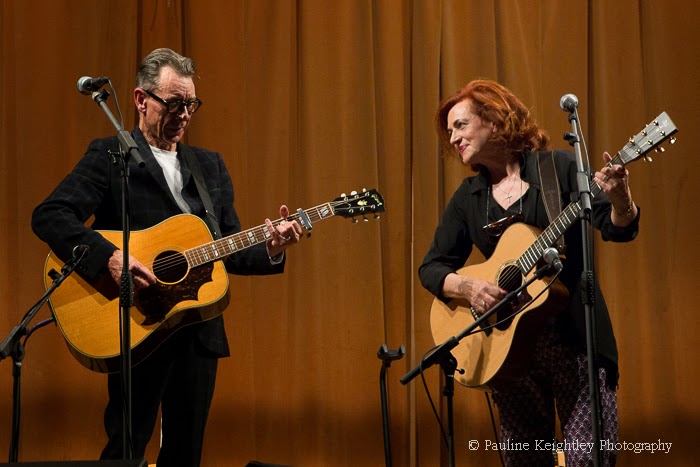 Rab always includes an older song and they finished the set with the poignant Doris Day song Que Sera Sera with us all singing along.

For their Encore Barbara sang her hit song Caravan ( I still have it in my head too!) and a Doug and Phil song, Long Time Gone.

Barbara has a poignant, beautiful timbre in her voice. The combination of Rab and Barbara's different styles and voices worked well and it was obvious they have a mutual respect for each other. The two performers know their roots and are comfortable in their own skins. They gave us textures and shadows, subtle tender and truthful messages and tones, that both helped to sooth and uplift.
Their 'Reunited' Ep April 2014 has a raw acoustic live feel, and such good songs. Reminds me a bit of 'Elvis Costello and Emmylou Harris' dueting together - http://rabnoakes.bandcamp.com/album/reunited-ep

They were very well supported by Edwina Hayes form Yorkshire, who gave us funny stories and had a clear lovely vocal. She sang a Richard Thompson song and a song she had co-written with Boo Heredine, as well as her own songs.

Big thanks to Jason, who because he cares passionately about music and particularly about folk music, runs a successful folk club. And congratulations for this his tenth year!

Barbara Dickson is a Scottish singer whose hits include “Caravan”, "I Know Him So Well" (a duet with Elaine Page) and "January February". Dickson has had 15 albums in the UK Albums Chart from 1977 to date, and had a number of hit singles. She has been described her as Scotland's best-selling female singer in terms of the numbers of hit chart singles and albums.  She has also performed in  many West end musicals on and tv and is a two-time Olivier Award-winning actress, Dickson's singing career started in folk clubs around her native Fife in 1964. Her first commercial recording was in 1968. Her early work included albums with Archie Fisher, the first of which, The Fate O' Charlie, a collection of songs from the Jacobite rebellions, was released in 1969. Her first solo album was Do Right Woman in 1970

This beautiful Scottish love song has long been popular with thirty-five versions in the Greig-Duncan collection. The earliest record of the song may be a chapbook with the title Ridges of Rye printed in Glasgow by J. & M. Robertson in 1799.