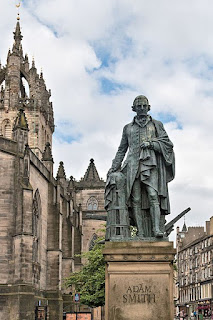 The Scottish enlightenment has been Scotland's biggest contribution to the world and there were two enlightenments, according to Alexander Broadie, Professor of Logic and Rhetoric at Glasgow university in his book, The Scottish Enlightenment. The first Post Reformation with Scots scholars studying and teaching in Paris, and being leaders in Europe; This resulted from the collaborations between France and Scotland. Scotland had close trading links to Flanders and the rest of Europe, in those days when we had busy sea faring ports. Scotland before union 1707 was a trading and outward looking nation and a leader in Europe, not isolated or backward at all!

Broadie writes about the first Scottish Post Reformation enlightened scholars and that Enlightened thought began with the collaborations between France and Scots in the 16th century.  The professors at Scotland’s ancient universities studied and taught in Paris with famous figures in philosophy, law and theology. The auld alliance between France and Scotland lasted for over 400 years from 1290 to 1707, and continues to this day.

Because how could the enlightenment of the 1700s just happen - “the discoveries of 18th century were only possible because Scotland was already strong in sciences, in mathematics, experimenters and informed observers,”

Scotland is very much a European country according to according to Broadie. He writes that Scotland was culturally as much a part of Europe as France, with the shipping and Scots scholars studying in Europe. ‘The three pre-Reformation, Scottish universities – St Andrews, Aberdeen, Glasgow - have always been strongly oriented towards Europe” ..and that the teaching staff were foreign educated Scots.”

The first Enlightenment was led by the scholars such as Duns Scotus (1265 - 1308), Philosopher and theologian;  John Mair (1467 – 1550). Professor theology Paris, who tutored John Knox; James Dalyrumple (1619 – 1695) Father of Scots Law and leading European. George Buchanan (1506 – 1582) Historian and scholar who taught James VI. Father of democracy; and many others.  **The second Enlightenment was in the mid 1700s, led by famous thinkers such as Frances Hutcheson, Adam Smith (Wealth of Nations, Theory of Moral Sentiment); David Hume, historian and philosopher; James Hutton  (1726 - 1797) geologist, naturalist and physician: father of Geology. The Scottish enlightenment is bound up with our country’s identity, and reaches back to the Reformation and beyond to the great cultural achievement of medieval Scotland.”

Some writers however claim the enlightenment began in England (and mention John Locke (1632 - 1704) and then spread to France – is this correct? Then again the term ‘England’ to many world wide is interchangeable for the term ‘Britain’ and Scotland is a mere region of England/ Britain much like Yorkshire or Devon. Does this deliberate distortion of history and geography matter? The BBC certainly view Scotland as a region. I believe it does, as Scots have over the centuries given significant achievements to the world, which in the past century have been ignored and downplayed and with Scots generally made to feel second rate. While the BBC broadcaster clearly has “a region for Scotland” agenda, with no mention of Nicola’s US trip all week on BBC radio Scotland – I’d not have known about her important trip to discuss global issues, if it wasn’t for reading the National newspaper.

Enlightened thought is crucial and our best defence against ignorant and often cruel dictatorships. Populism and dictatorships have been spreading around the world in recent times and are a threat to liberal democracies everywhere. The lack of moral leadership in Johnson’s has been causing a crisis of trust here in the UK. We’re now suffering chaos, no foreword energy planning and the central policy of service industries, based on the city of London. There is no real serious leadership at the centre of this floundering disunited kingdom.

II  Before the Reformation and enlightenment there was “slavery of the mind” and free thinkers were not only imprisoned but burned at the stake for heresy and for daring to think for themselves and not blindly obeying the authority. The enlightened thinkers believe that ‘thinking for ourselves’ is more moral, creative and superior to suppression and control. “an acceptance of authority, constrains and distorts humanity; and that to think and look for ourselves is morally superior; and means to grow intellectually.” Dictators fear the ‘chaos of democracy” and democracy certainly has flaws. However debates and liberty are also democracy’s creative strengths.

To improve ourselves we must use reason and common sense and to learn the lessons history teaches us. David Hume recognised the need to use reason to fight ‘bigotry and superstition.’ Rulers feared freedom would lead to ‘chaos’ – here in Britain too. When the French and American Revolutions took place late 1700s, the church in Britain preached against the ‘French terror’ and reformers for votes for all men were exiled to Botany Bay (such as the martyr Thomas Muir).

There were two main principles of enlightenment – 1. Freedom to think for ourselves. Freedom of thought  2.  The social virtue of tolerance. The Scottish Theory of common sense. And the balance between personal responsibility and responsibility for society and a moral compass. Another key aspect of the SE was that is was a highly social activity with many societies, clubs and debating and meeting places.

Enlightenment reasoning means challenging and thinking for oneself, rather than accepting dictates from a religious or political authority or mass media – how is democracy even possible without critical thought? I used to believe democracy was only possible with a free press, decent education, rule of law, balance of power and a certain level of economic growth. Of course all this reasoning and enlightened thought requires effort! Broadie claims the Enlightenment continues to this day.

The Scottish enlightenment’s impact on democracy and reform have been greatly ignored. I only first heard of this incredible history in a talk by professor Tom Devine a few years back, even though I studied higher history at school in Edinburgh, it was all English history we were taught. 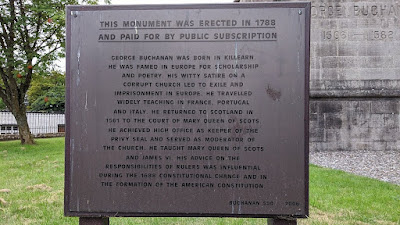 III   A few miles north of me, in the historic village of Killearn, there is a tall memorial to the scholar George Buchanan 1506-1582 and I was curious – who was he and why the tall monument? He was tutor to the young Stewart king James VI and put forward the theory that real power resides with the people -  De Jure Regni apud Scotos, published in 1579 - one of the most important books on democracy and an essential text in our understanding of the constitution and the state. Professor Alan Raich writes on Buchanan,

“His book follows the Declaration of Arbroath (1320) in saying that all political power resides in the people, and it must reside in the people: and that it is lawful and necessary to resist kings (or all rulers) if  they become tyrants….There were many attempts to suppress his work, particularly by the king he tutored and he foresaw where stupid Stewart vanity would lead. He was a major player in the European cultural context.”

The inscription reads – “born Killearn. He was famed in Europe for scholarship and poetry. His witty satire on a corrupt church led to exile and imprisonment in Europe. He travelled widely teaching in France, Portugal and Italy. He returned to Scotland in 1561 to the court of Mary Queen of Scots. He achieved high office as keeper of the privy seal and served as moderator of the church. He taught Mary Queen of Scots and James VI. His advice on the responsibilities of rulers was influential during the 1688 constitutional change and in the formation of the American constitution.” Wisest among the wise.”

That’s the first time I realised Scotland before the union with England, was not a dark, isolated, backward, or ignorant place as often portrayed in both TV and film. The reality actually is that Scotland has given many innovations to the world, not least crucially the theory of democracy and government for the people, by the people.

Scotland’s European connections are centuries old, dating from 16th century and beyond – and not only about wars but about our scholars, language, ideas and innovations. Many Scots words are form Flanders and France..

Its important to understand the significance of the Reformation and of enlightened thought on democracy and education in Scotland and worldwide. According to Professor Tom Devine, the Scots enlightened thinkers took their philosophy over to America and founded universities there, notably John Witherspoon who founded Princeton– and Scots were some of the America’s founding fathers.