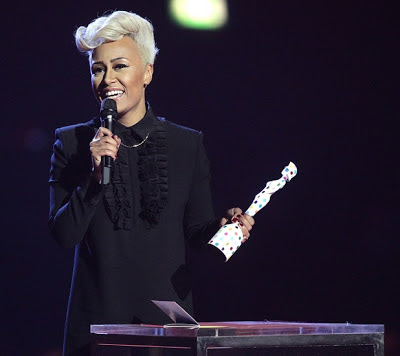 Muse opened the show with a big production behind them of attractive ladies paying violins. Considering Mumford are the big thing, it might have been cooler to have them open and have Muse playing a more real band set later in the show. Mumford's dance vibes mixed with folk offer a real fun energetic set. I saw Mumford in Glasgow in April 2010 and they certainly got the crowd dancing and singing. The sets were spot on though and a lot of thought had gone into Robbie Williams chequered backdrop!

American artists Justin Timberlake and Taylor Swift performed, as did the pop boy band One Direction who have taken the teenage pop market by storm and have had several number ones worldwide – hugely successful and X factor graduates no less.

*The Critics Choice award this year went to Tom Odell – a guy for a change - and another piano playing singer songwriter.  He sounded promising when he sang acoustically at the after program, although perhaps sounding a little bit too much like Mumford or Bright Eyes. I am not sure at all where the great male singers are these days - except in bands...None of them have anything new to say to me, I have heard it all before.

*The highlight of the night was Emeli Sande who won Best Female and the MasterCard Award for Best Album.
Emeli Sande is the genuine article and she commented after winning the album of the year award, that she was 'an unlikely popstar.' I was very happy for her as I have been following her career since I first heard her sing in 2007 at her cd launch gig here at the Oran Mor Glasgow.

The music business makes little sense though I must admit!?  Look at the guys - Ed Sheeran, the new James Blunt? or Robbie Williams even who has won the most Brits ever!!??  Oh well at least One Direction are out there!  The problem is the mainstream is not really where the best music is.

The BRIT awards began in 1977 as part of the commemoration of the Queen’s Silver Jubilee and as an annual event in 1982 under the auspices of the British record industry's trade association, the BPI. The 2011 Brit Awards were held at The O2 Arena in London for the first time in its history, moving from the original venue of Earls Court.