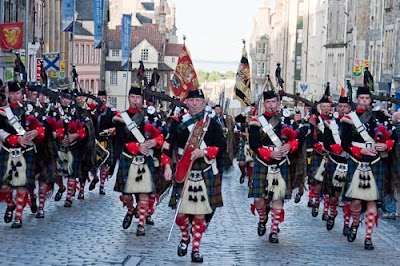 My Edinburgh Experience - The Clan Gathering Edinburgh 2009
A year or so back I saw a photo in the Scotsman – it was an old b & w photo of a clan parade about 50 years ago in Princes Street Edinburgh. I thought it was interesting. Many ex-pats had returned to take part and celebrate their Scottish heritage. As I arrive July 25th, my birthday, I am struck by the contrast in cities, behind the cobbled stones. Here the bin men are on strike – yet again. There are delays with the trams. Still Edinburgh always put on a good show.

This was a unique affair, several years in the making and the clan Gathering offered expats a chance to come to Scotland and celebrate a shared heritage and shared roots.
There was a ‘Scottish festival’ on the volcanic parkland (some of which doesn’t drain) between Arthur Seat and Holyrood – dotted with white doomed tents and ornate histories flags. There was also a very unique fashion display of Scottish finery from the modern Scottish mini kilt, Bavarian style tartan trousers and the more traditional tweed jacket and kilt. The clan chiefs wore feathers in their caps. Also the strong heavy set Scottish athletes.
The Saturday was kind and sunshine filled the park. There were music stages, and the Clan area with neat lines of small white tents. I did think it a bit strange this Scottish fun park, I wasn’t really sure what to make of it. The centre seemed to be the highland games, with the music stages off to the right. Also a packed marquee next to the games staged the Scottish dancers.

The Parade. The highlight was the Clan parade that evening of over 125 clans led by pipe bands up the Royal mile past St Giles to the castle – where there was later a drama-filled and colourful pageant called Aisling children.
The parade felt an odd mix of history and relaxed fun – with many clearly in good spirits and enjoying being part of a historic celebration. The street was lined with people cheering and clapping. I enjoyed the spectacle and variety of it all – and that we were celebrating Scotland in a way I’ve not seen before. Scotland has much to be proud of.  While waiting on the parade I met a pretty young German girl form Hamburg. She smiled a lot, also had a canon camera and said how impressed she was with Edinburgh- that she had had no idea how interesting a place it was – and now to have this historic parade. At the rehearsal Friday I met a Canadian from near Toronto and we sat and chatted on the cold scaffolding steps about the joys of photography! I met loads of very interesting people, some only in passing. All were having an excellent time in our beautiful capital. I have the memory of sitting waiting on the castle esplanade, looking at the clear sky and remembering many visits in wellies to see the tattoo. I feel on top of the world here. I remember drinking real ales at the Beehive in the grassmarket. Yet it was also strange being part of the photographers, running up the Royal mile with the Atholl Highlanders marching behind – all quite surreal. I took some fun photos - hope you enjoy the tartan display!