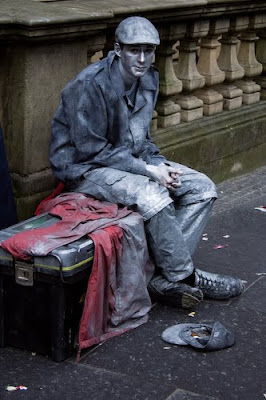 I was reading that the Edinburgh festival is short on cash and may not do a fringe Sunday in the meadows this year, and they also lack a headline sponsor. . There was a big Ticket Box Office problem last year with the new online system messing up ticket sales. I went directly to the venues for my tickets.
THE EDINBURGH INTERNATIONAL FESTIVAL (EIF) was begun to pick peoples spirits up after the Second World War. We headed over this year on the Friday to the Pleasance venue to see some comedians up from England.
At the show most are English in the audience, while everyone selling me tickets or offering promotion flyers are English – this begins to feel a bit odd with Edinburgh being the Scottish capital. It feels both strange and familiar being in my hometown for the Fringe 2008. I enjoy the scale, diversity and character of it all, and trying to sample what I can while my main focus is taking photos. Edinburgh festival is exciting and intensive for taking photos. It's quieter the first week, and the hub builds over the 3 weeks. I read the Scotsman reviews and wander the High street. It strikes me as odd – one performer dressed in an elaborate Georgian costume and white wig, plonking out simple tunes on what looks like a toy hand held piano. By contrast simply clad men in leather jackets who are in the tradition of the centuries old theatre street performer. The former strikes me as overblown hype, and there is plenty of this on show. I read of a young blonde lady concert pianist from Canada who can actually 'improvise' – as far as I know jazz musicians do this all the time perhaps it is just unusual for classically trained musicians?
For the buzz of the festival take a saunter down the High street cobbles – not for those in a rush though. For a change of pace try the Book festival in Charlotte square, or one of the Art exhibitions – the main Art gallery being at the foot of the Mound. In the Fringe Brochure comedy is nearly 70%, Theatre a close second, Music third and Art fourth. This is part of the history of EIF as the festival started in the forties. Comedy, with shows like the footlights in the 70s, gave acts like Monty Python their first stomping ground.
The theme of his years festival was: about our sense of Community and redrawing boundaries – about offering a 'journey along cultural boundaries'. George Square has started a venue to promote professional musicals. There are many amateur shows at the Fringe, so it can be difficult to avoid the awful. While of course every professional artist has to start somewhere?! And this is one of the challenges as a pundit – what to go see. High Street : I notice two young guys in earthy colours playing a new instrument the hang – which look like an upturned wok. .
Watching performers on the High street (plus reading reviews) is essential for some 'out of this world' entertainment for the cost of a few pennies in hats. Art Matters and this festival was started to bring back hope after the devastation of WW2 – so support young artists. Meanwhile the Beijing Olympics began with the most extravagantly artistic opening ceremony ever. Mostly EF is about spectacle – jugglers, fire eaters, escapist artists, people on stilts, wrapped in cling film, nude, elaborate gear or face paint – the extreme is fun but also get a bit nuts. Even the most pierced lady in the world. It's a place where the old and the new play side by side. The EF offers extremes for its run over 3 weeks - the love of life, the pains, absurdities, creativity, our passion and joys and sadnesses. To find the really interesting bits – look for the Fringe of the fringe. Here's to EF 2008.