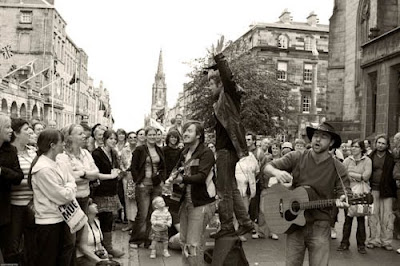 Edinburgh Festival ‘GREYFRIARS TWISTED TALES’ August 2008
The Martians - winners of “THE SPIRIT OF THE FRINGE” 2008.
‘ Great fun… These boys have a great future .... The Martians have landed.’ Scotsman 'Consistently funny and with quality songwriting, this fast paced madness was pure entertainment' 5 stars Three Weeks. ‘Such catchy tunes that I have stuck in my head, full of fast paced delicious dry humour and clever (twisted!) takes on human foibles and superstitions, love of dogs and Scotland! ..and the Mary Poppins meets Hitler sketch, a pure musical Monty Python!’ 5 star reviews!

The Kielty Brothers and Houston performed at Edinburgh festival with their most professional show so far. They have the backing of Carole Metcalfe of the Bridewell theatre company.
The Martians are polished performers with their fun humour and melodic songs. Great audience reactions too. Their songs are full of fast-paced, dry humour with their love of dogs and Scotland songs, with titles such as Invisible SkyGods, Reformation, Nessie, Not A Valley Anymore. One highlight was Gerry as Greyfriars Bobby (a dog with black socks on his ears) and the Mary Poppins meets Hitler sketch - which was all very much a musical Monty Python!

CITY OF THE DEAD GHOST TOURS
Both John and Gerry take unsuspecting tourists to the Covenanters Grave in Greyfriars Kirkyard. I was fortunate to catch John Kielty’s last Ghost tour. Postscript - John will be doing a UK tour with the reduced Shakespeare company in ‘The complete Word of God’ He is writing a new musical about Jacobites called ‘Charlie’s Year’.