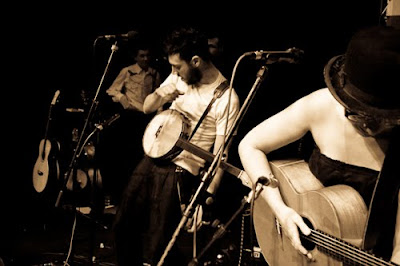 'banjo-dominated from its tom waits-like washboard blowouts'
I was thrilled to travel down to to shoot for the bands live album. Mat met me at the station so I missed the BMP March.

Kirsty and Mat have a flowing and engrossing vibe to their upbeat tunes. Kirsty has moving soul-filled vocals and Mat provides the energy with his stringed instruments. Her songs feel light and easy, but are full of mystery and clever meanings. They do a mix of laid back jazz-infused bluegrass acoustic tunes. Kirsty sings her travelling songs that draw close affinities with nature – ‘Your Under My Skin’ (songs about dust!) ‘Killer Wasps’, the fun ‘Sandman’, the bluesy tones of ‘Easy’. She draws inspiration from her travels hobo style. She and Mat have been performing together the past 4 years and are based in .
McGee's evolving band is named the Hobopop Collective. With a diversity of musicianship the Collective consists of on drums Rob Turner ( jazz band Magic Hat Ensemble), on double bass Nick Blacka (Magic Hat Ensemble), and for this live recording on guitar James Steel (from the rock band Brute chorus) Chris Cundy on clarinet ( Fyfe Dangerfield's band the Guillemots and the Gannets) For her recent album - 'Live Album No 5' - McGee decided to have it recorded in one live take in a Manchester theatre to have that special live audience vibe. This release will include songs from her 2008 Kansas Sessions album, some older favourites as well as newer unreleased material.


The band first caught my attention when they supported Capercaille at the Old Fruitmarket gig in January at the Celtic Connections festival 2008. Mat is a born performer with his exuberant playing and joy of music. He is the lively shadow to Kirsty’s serene calm, while she also has a questioning edge to her voice.
Memories of Mat’s long expressive hands and Kirsty’s warm smiles. The day went by in a blur of quick grabs of tea and Kirsty’s warm hospitality, which included a wonderful ginger cake (recipe please!). James wearing a fur coat buttoned up which matched his brown hair–do, Chris reading Crime and Punishment, Nick thumping his double bass rhythms (he thought my image of him should be made into a duvet cover! Lol) – well and Mat being Mat, funny and expressive – running everywhere and never staying still too long. Kirsty is an anchor with her soothing voice and songs – while Mat adds the fun rhythms. The band were fun - cool clarinet from Chris and a tight rhythm section. The gig went by in a blur also. Taking music photos is very intense for me. I can’t thank you guys enough for the fun day – and opportunities to take classy images. Crashed at night….! Hope the album is a big success which you deserve and my images help to express the fun day.
Thanks guys for all the warm hospitality. I really enjoyed the shoot, the gig, the whole experience. Check out Hobopop Collectives music – Kirsty’s caressing vocals and colourful songs.