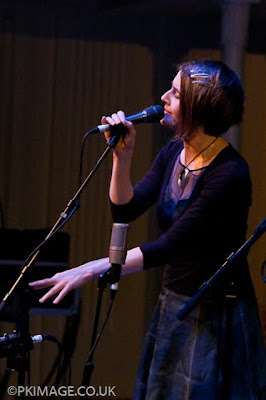 Tall Ship Gig Karine Inge Kirsty and Mat magic evening -  Karine Polwart! I had a chat with Karine. She writes brilliant songs –and has a wonderful voice. One of the best. She keeps it simple. Also Kirsty & Mat Martin wonderful fun young duo who do acoustic blues-jazz tunes. After the gig the sky was the most perfect deep blue, the street lights like fairy lights, the moon a tiny sliver. It was light a dream or like a Picture book cover.

*Karine is an astute, caring and thoughtful writer of memorable tunes. Her songs, with their direct yet careful simplicity hit home with her clear unaffected soothing tones. Karine has an engaging voice. She sang songs from her wonderful new album – ‘This Earthly Spell’ – Firethief ‘down where I cannot go’ , ‘Rivers Run’ and the touching ‘Sorry.’ Karine sang a song ‘ Bonecrusher’ that she said she had written for her favourite Tv series Deadwood. She also sang 2 of my favourites ‘ Daisy (‘There are people in this world who don’t think like you do.’) and the moving Hole in my Heart. Karine finished her set with a haunting lullaby songs ‘Beow’ which means ‘Alive’.  Her music has joyful moving directness and sincerity. As Karine’s sings - ‘hearts can sing.’ Thank you guys for such a memorable evening.