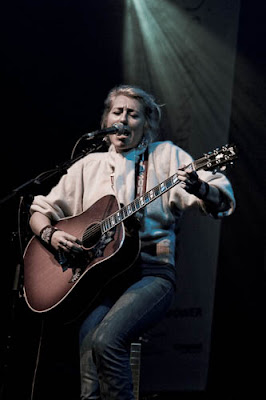 MARTHA WAINWRIGHT Old Fruitmarket Celtic Connections 2009
Shimmers like the sun – Something very gentle yet surreal and very strong in Martha’s performance of her meaningful songs. They swoop, yet also carry a clarity and depth to them. Her influences are strongly folk (from both her parents) yet blend and converge with other song writing and vocal styles - such as contemporary pop/rock, alt American country and even cabaret chanson, as heard in the early 20th century vaudeville clubs of Europe. Honing her own very unique style.

QUOTE -
Hamish Henderson Poet, translator, Highland folklorist, campaigner for Scottish parliament and guiding light behind the Edinburgh fringe festival. The tryst of Hamish Henderson, who has died aged 82, was with Scotland. It was a meeting of high consequence - across the 20th century, in darkness and in sun, Scotland informed all that Henderson was as a man and a poet. And in his Nelson Mandela freedom song, Rivonia, when Henderson sings, "Spear of the nation unbroken", it is to Scotland as much as South Africa that he refers. Like Burns, Henderson was, first and last, a poet, and poetry was for them both language rising into song, responsible to moment, people, place and joy. (QUOTE GUARDIAN Timothy Neat March 2002)