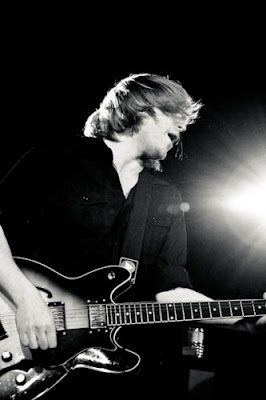 The band are being spoken of as the next big thing. They played packed and popular gigs in Inverness where they picked up a following, and also supported Sons and Daughters there.
Drawing on influences as diverse as folk legends the Waterboys to Canadian rockers Arcade Fire – this young 7 piece rock band from Edinburgh command the stage. In one sense their music might be called Celtic rock? - with the feel and mood of Scotland matched with an energetic rockiness. From charismatic blond front man Jamie Sutherland, and his brother on fiddle who displays a rich and dynamic style – the band have then added extra oomph with trumpet, and depth with cello. Also they boast powerhouse strong drums - good drummers can be often overlooked – yet they are the centre core of any top band. The band includes fiddle, guitar, bass, keys, drums, trumpet, and cello.
Sutherland also plays keys and guitar and takes the tempo down for a few songs. My thought is - watch out for this band and expect the music to match the hype here.