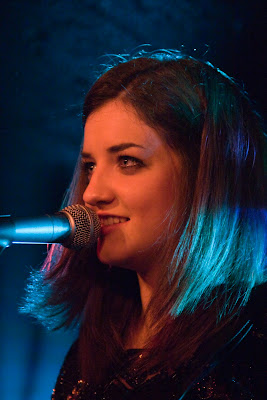 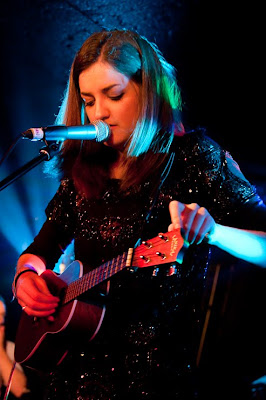 Pearl (aka Katie Sutherland) has a melting, soulful voice and catchy tunes. She always has fun on stage with her gigs. After the first song she took her high heels off and relaxed into her set. For three songs she had violin and cello, as well as her Puppets - that is her band!

Pearl and the Puppets entranced a packed crowd at King Tuts Wah Wah hut Dec 21 2009. The band consists of Pearl (vocals/guitar), Blair McMillan (drums), Gordon Turner (Guitar), Scott Clark (Bass) and Michael Abubakar (Keyboard) - and are tipped for big things. Pearl is a singer songwriter from Kirkintilloch Scotland whose sound has been described as a being similar to that of Regina Spector. She is signed to Universal and headlined at the Wickerman Festival Scotland 2009. Her song "Because I Do" was featured on a Vodaphone advertisement in Australian and New Zealand.