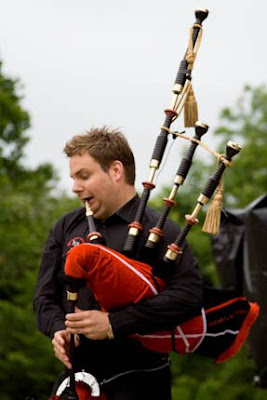 The second Mugdock music festival June 2008 was a big success with sell out events for the Red Hot Chilli Pipers and Michael Marra.
The Walled Garden Concerts - were a huge success. On Saturday the perfect harmonies of Prelude from Newcastle ( hit song Neil Young's the Goldrush) After which the Red hot Chilli Pipers rocked it with their pipes and drums and had the crowd on their feet. The Chilli Pipers are talented young men who can play those pipes! AND also dance and rock with the addition of a rock band. They had lots of colour and personality, and the crowd loved them. Their music ranges from the Beatles to traditional Scots tunes. The Chilli Pipers were followed by the colourful Massia Warriors in brightly decorated costumes who managed to smile their way through the rain (which started during their set) and  with jumping and getting the audience involved asking them questions.

On Sunday the East Dunbartonshire Swing band brought jazz and sunshine, followed by the fun West African beats of smiling Samba Sene and Diwan, and the Beats of Brazil.

For the FREE Courtyard event we had a marquee this year, and it buzzed all afternoon on both the Saturday and Sunday with a strong line-up and variety of artists and dancers. The dancers brought colour and drama and included flowing Chinese, stately Indians and the power of Flamingo. Ben the Hoose from New Zealand (winners of the traditional album). Two young men originally from Scotland on fiddle and guitar who played some top tunes and got everyone’s feet tapping. Ayawarra with funky African drums had the children dancing on the stage. Great fun.

Seylan and Cheyanne played their classic traditional music on harp and cello along with Seylan's rich vocal. The refuges children of the Sighthill Project were a delight both singing and playing their fiddles. Plus festival director Erne Parkin and the Crossborder band entertained with upbeat folk/bluegrass song.  http://pkimage.co.uk/mudockfestival2008